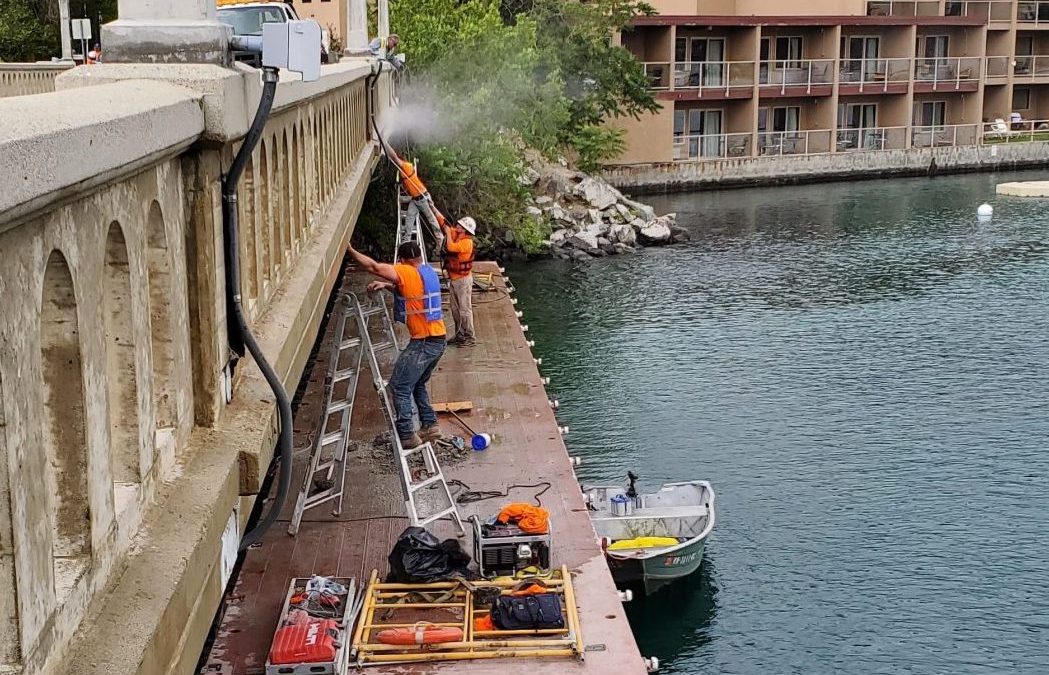 By Dan Ireland and Greg Hess

Built in 1927, the historic Woodin Avenue Bridge with its iconic lamp posts stretches 450 feet over pristine Lake Chelan in Washington and serves as a grand entrance to the city of Chelan’s downtown.

During the summer tourist season, the bridge bustles with people, baby strollers, cars, trucks, trailers, and RVs. Until 2019, this was all happening within the confines of two 10-foot vehicle lanes and narrow four-foot sidewalks on each side. There was no disagreement that the town had outgrown the narrow concrete bridge, but the City grappled with how to address safety concerns related to its heavy use and geographic restrictions. Additionally, the bridge itself was in dire need of rehabilitation to fix numerous issues such as exposed rebar, leaning bridge railings, failed expansion joints, faulty bridge wiring, lighting issues, cracked sidewalks, and a rutted bridge deck.

Getting to a Design Solution
For more than a decade, the city considered myriad options, including replacement bridges, a companion pedestrian bridge, and bridge widening. When these options proved too costly, the city had to take a step back and look for an alternative solution. In 2016, a review of regional traffic patterns revealed a solution: By redistributing the traffic, they could reduce the bridge to a single, one-way lane to make space for high-volume sidewalks and accommodate bicyclists.

The city and the Chelan-Douglas Transportation Council, in partnership with engineering consulting firm SCJ Alliance, crafted a vision to improve community walkability, separate traffic movements through the downtown core, accommodate bicyclists, and maintain the bridge’s historic charm. The one-way bridge reconfiguration would also incorporate changes to the intersections and roadways at both ends of the bridge. These would include new concrete ADA (Americans with Disabilities Act) curb ramps, as well as pavers, colored concrete sidewalks, permanent signing, landscaping, and irrigation installations.

“For years, the city had been trying to figure out how to expand the bridge’s capacity and make it more of a gateway feature,” recalls SCJ Alliance Project Manager Dan Ireland. Ireland, a civil engineer, partnered with Greg Hess, a structural engineer with KPFF Consulting Engineers. Greg and his team led the bridge structural design, which included important structural repairs to the bridge columns, superstructure, bridge railings, and iconic bridge lights. 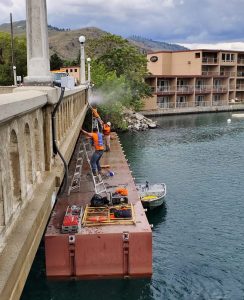 The solution included tearing up the historic downtown sidewalks and roadway, which the city recognized as an opportunity for some much-needed infrastructure improvements, particularly upgrading 1,200 feet of the existing water main to a 16-inch-diameter pipe. About 700 feet of the pipe could hang suspended under the bridge, hidden between existing bridge girders.

Throughout the design process, there was extensive public outreach, including a meeting with the Historic Downtown Chelan Association. They revealed they were already spearheading an effort to revamp the Woodin Avenue Landing Park located adjacent to the bridge.  Upgrades would improve access to the downtown from the water, increase access to Lake Chelan and the existing PUD dock, and create an inviting space for locals and visitors alike. So the Landing Park project was wrapped into the plans as well.

Approaching multiple efforts as a single, coordinated project created efficiencies and limited impacts to downtown businesses, residents, and visitors. “By incorporating the park and utility upgrades into the bridge repair and road reconfiguration, it saved months of impacts to the downtown businesses and thousands of dollars,” says Ireland.

Project Funding & Tied Bid Process
Typically, projects are not allowed to combine due to conflicting funding types or varying agency preferences. This project was a collaboration of multiple agencies and organizations, including the City of Chelan, Washington State Department of Transportation, the Washington Transportation Improvement Board, Chelan-Douglas Transportation Council, Chelan Public Utility District, and the Historic Downtown Chelan Association. Funding sources were many, including city general funds, street bonds, utility funds, state and federal grants, and money from various smaller sources. The price tag for the entire bundle of projects totaled around $4 million.

In this circumstance, while each project was independent of each other, they were all physically adjacent to or overlapping of each other. By using a tied bid process, approved through the Washington Department of Transportation and supported by all the funding agencies, all the projects could to be managed and constructed at one time. This allowed everything to be advertised as one, bigger project, garnering more interest from potential contractors and reducing costs compared to running them as four projects at four separate times. In 2018, Selland Construction was awarded the construction bid.

Construction Timing & Safety
Contractor Selland Construction timed their work to reduce tourist season impacts. During the project’s design phase, construction duration and methodology were discussed with city staff and the City Council. In the contract documents, the city included multiple single-day and full-week closures of the bridge to complete the work quicker and outlined the needed detours and signing. Selland also committed to never closing the bridge to pedestrians during construction.

In 2018, the project was started immediately after the heaviest tourist day in Chelan, Labor Day, and extended to the summer of 2019. They worked on subsurface activities during the late fall and winter months to reduce the amount of work needed during the following summer.

Environmental Considerations
Lake Chelan is an active recreational lake known for its clear blue water. Performing construction activities on a deteriorating historic bridge without contaminating the waters was a high priority for the team. Typically, drape cloths are used for debris collection under a bridge, but Chelan is known for its high afternoon winds. Instead, Selland obtained a wide platform-style floating barge with a solid surface to prevent debris from entering the lake. The same barge was repositioned underneath the bridge in other areas during high-risk events like concrete pours, spall repair work, and bridge painting. Selland also used high-performance and fast-setting materials to reduce exposure time.

Lightweight Sidewalks
The sidewalks on the bridge were widened from four to eight feet on one side and from four to five feet on the other. To ensure the wider sidewalks did not impact the structural integrity of the bridge, the design team developed an ultra-lightweight system consisting of several inches of geofoam topped with four inches of fiber-reinforced lightweight concrete. The overall system was less than half the weight of a traditional concrete sidewalk and allowed the bridge to maintain its load capacity for normal traffic as well as emergency vehicles such as fire trucks.

Precast Lamp Posts
The unique lampposts that adorned the bridge were failing and needed to be replaced. To ensure a high level of accuracy and consistency in replicating them, the new lampposts were precast in a controlled environment away from the bridge. The new lampposts also brought added value with LED lights that can be controlled remotely to change colors and brightness to match the season or for special events.

Pedestrians and Vehicle Traffic
Managing a project with multiple elements in a tight location, all while negotiating summer recreational vehicle and pedestrian traffic was not an easy task. It was a frequent comment amongst the team that cars were easier to manage than the thousands of summertime pedestrians. Selland staged their construction zones to make sure a pedestrian route was always in place, even during bridge closures.

Converting the bridge into a one-way road after nearly 100 years was a dramatic change for the local community. The risk of drivers reverting to old habits was a great safety concern for the city. To prepare the community and tourists, the team used the following tactics to mitigate the safety risk:

One of the greatest challenges and successes was notifying the traveling public of changing traffic patterns and bridge closures. The city team was diligent at updating Google Maps to show temporary construction activities and eventually the bridge’s permanent change to one-way-only traffic. The focus and energy on this updating made a big difference to out-of-town tourists who were relying solely on their apps to navigate through the area.

Creating an Information Hub for Project Communication
The city invested in a project-specific website that SCJ created and managed. Every week after a construction meeting, the contractor’s schedule was uploaded to the website, and an email blast was sent to everyone subscribed as well as to key stakeholders and the media. The updates notified of bridge closures, detour routes, water service line outages, and project progress. The website also allowed the design team and City staff to field comments from the public and typically respond within a day. The website became a powerful tool to share the project history, purpose, and timeline, as well as upcoming traffic impacts or detours.

Additionally, the face-to-face communication by Selland Construction, SCJ’s construction manager, and city staff was key to managing short-term interruptions to small businesses during their peak summer season. Through deliberate, anticipatory, clear, and consistent communication, the public was kept well-informed of bridge closures and the reason behind them, reducing complaints.

Today
Today the entrance to downtown Chelan is safer and more welcoming and has a new look, but it maintains the same historic feeling. This project is a testament to how historic preservation projects can transform an aging bridge into a multi-use amenity that balances cars and multimodal needs, all while preserving the iconic look and character its community values.

Traffic that once only passed through downtown and conflicted with pedestrians now goes around downtown. This has created a better balance between pedestrians and vehicles and a seamless pedestrian corridor from the bridge into downtown. The new streetscape around the bridge is comfortable, safe, and accessible to everyone.

“It’s especially gratifying how this roadway reconfiguration project has made the entrance to downtown more inviting,” says Ireland. “Our work included widening 1,900 feet of sidewalks, adding 1,200 feet of new bike lanes, enhancing streetscapes and lighting, and adding the new Woodin Avenue Landing Park for the enjoyment of so many. It’s now a more active, enjoyable place to be, and businesses love it! It’s very rewarding to see this project have such a positive impact on the community.”

Dan Ireland is a civil engineer with SCJ Alliance Consulting Services and Greg Hess is licensed as both a civil and structural engineer, working for KPFF Consulting Engineers. Both men work out of offices in Washington State, though they primarily find themselves working from home these days when not doing site visits. Dan and Greg have enjoyed helping communities, large and small, with their public works projects for nearly 20 years each.