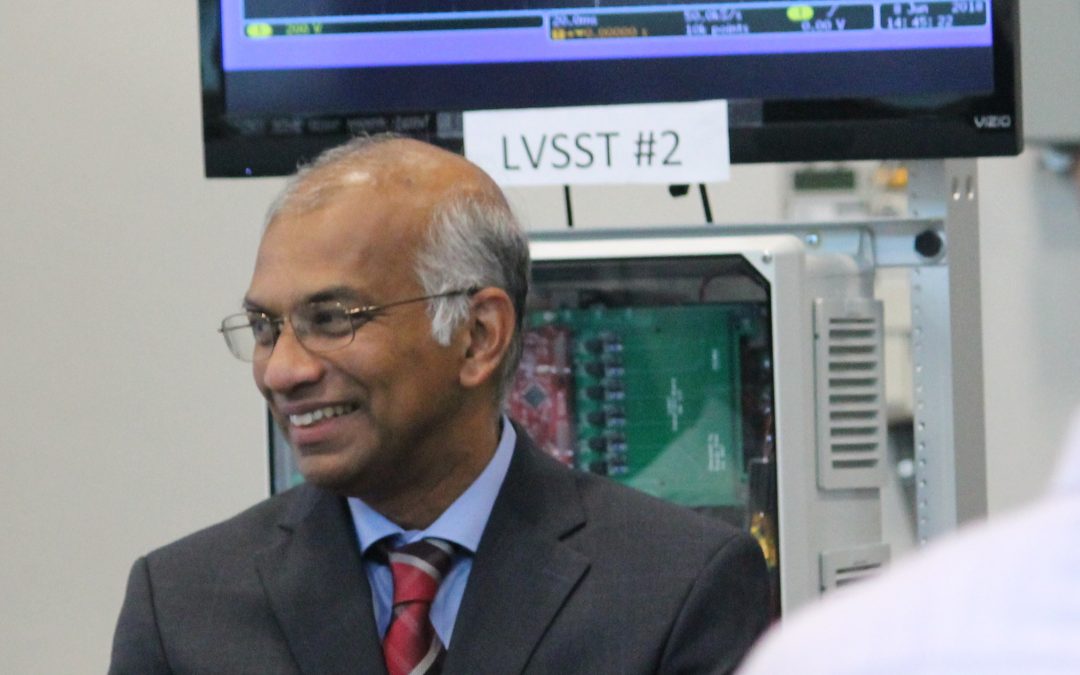 If you drive down a typical road and look up when you come to a utility pole, you’ll likely see a transformer or two at the top of it. If you pass an electrical substation, you might see transformers there too, only mounted on the ground. These ubiquitous metal boxes are seemingly everywhere, as they play an integral role in the nation’s electrical grid.

In this age of electronics becoming more powerful and smaller all the time, you would think transformers would get on the bandwagon, as they haven’t changed much over the years. Actually, they’re about to do that.

The Future Renewable Electric Energy Delivery and Management (FREEDM) Systems Center recently conducted a study using computer models to find that smart solid-state transformers (SSTs) could be used to create a stable, reliable smart electrical grid. This could go a long way in not only increasing the reliability of the grid but also enabling solar and wind energy to function smoothly on our grid. 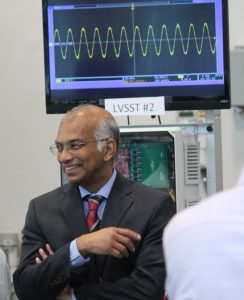 The FREEDM) Systems Center came into existence back in 2008 at North Carolina State University (NCSU) as part of the Obama administration’s research and development effort to transition the nation to the Smart Grid. Funded by the National Science Foundation, the FREEDM Systems Center has scholars, companies, and students working to modernize the electrical grid and make sustainable energy an integral part of America’s energy mix.

Staffed by alumni, faculty, and post doctoral researchers as well as other NCSU staff members, the center offers academic programs for undergraduates and graduates. It also has several industry members as partners, including leaders in electrical equipment manufacturing, utilities, fuel cell and energy storage, alternative energy systems, and software development. And it partners with other universities including Arizona State, Florida A&M, Florida State, and Missouri University of Science and Technology.

To understand SSTs, it pays to look at the conventional transformers found at distribution points within the power grid. They step up the power coming out of generators to high voltages so it can be transmitted long distances, and then they step it down to lower voltage so it can be used safely in homes and businesses. But that’s all traditional copper and iron transformers can do. 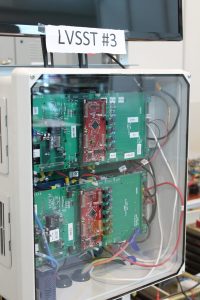 According to Iqbal Husain, Director of the FREEDM Systems Center and ABB Distinguished Professor of Electrical and Computer Engineering at NCSU, “A solid-state transformer is a replacement for the regular iron-core transformers you see in urban areas and on pole tops, the difference being it has electronics around it. You can call it a controllable transformer.” A solid-state, electronic transformer acts as an energy routing device between the grid and consumers, as it can redirect power as needed to address changes in supply and demand.

Not surprisingly, an SST has semiconductor devices in it, including transistors. It has windings but much smaller and more compact than conventional transformers. It has an iron core also, but that’s made of a new material that can operate at higher frequency. It also has capacitors in it.

Engineers at the FREEDM Systems Center invented the SST around 2010. Husain remarks, “Right now, we are in generation 4 of development, and we gradually improved the performance and showed that these concepts work. It has been very successful with prototype demonstrations in the lab.” Aranya Chakrabortty, associate professor of electrical and computer engineering at NCSU says, “The potential is tremendous because there are several advantages of using solid-state transformers compared to the ones we have today.”

Chakrabortty specializes in control theory and designed the controls for the SST. “The solid-state transformers are complicated devices. They have very non-linear behavior,” he says. “My responsibility is mostly to design non-linear control systems that can make sure the current and voltages and frequencies and other electrical variables associated with the SST are controlled the way they should be, despite the different kinds of disturbances happening in the grid.” 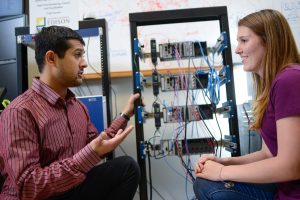 Chakrabortty explains that the controls consist of signal processing boxes that sense the voltages and currents inside the transformer and outputs a control signal that goes into the duty cycle controller of the transformer. “Sometimes you use pulse width modulation control, but an easier word for the type of control I am designing is called duty cycle control.”

The overall objective of the recent project was to further develop the fourth-generation solid-state transformer. The team included four graduate students, including three PhD students and one masters student. As Chakrabortty explains, “There were two parts of the study. First, we carried out many simulations just to make sure the controllers we have built perform the way we expect them to. For those simulations, we had to create high-fidelity models.” The students wrote down all the modeling equations of the SST and then coded them in MATLAB and Simulink. They also wrote down the controller equations and simulated different kinds of operating scenarios, loads in the system, faults, disturbances, and other outside entities. They created a plethora of different operating scenarios that can commonly arise in a distribution grid.

“Once we had confidence about the success of the software part of the simulation, we implemented it in a realistic hardware model of the transformer in our lab,” Chakrabortty says. They have actual solid-state transformers in the lab that are active and connected to the main supply line.

Renewable energy flows the other way
Today’s grid is a one-way system. Power companies generate and distribute electricity from large, mainly coal-fired plants to businesses and households. Because the flow of electrons through the grid needs to remain uninterrupted, the grid’s not good at accommodating power from renewable sources like wind and solar because they’re intermittent.

The idea of a smart grid that can also handle power flows back from our homes to the power company has been around for years. Among other benefits, such a grid would facilitate the use of renewable energy and storage. But, to date, the smart grid has been mostly conceptual. The new study indicates that it could move from concept to reality in the near future, using technology that already exists, the key technology being the SST.

In explaining the need for a smart grid, Husain says, “It’s the power balance. The load always has to match the generation. So if we have a lot of renewable energy, one problem would be during mid day and there’s a lot of renewable energy and there’s excess power generated by the PV, but there’s not enough load to take it, so that could cause instability and bring down the whole system. That has happened in Hawaii and other places.”

Solid-state transformers can distribute the energy in a controlled way so when there’s excess generation in one place, it can shift it to an area that needs power. “But you also need to have some storage capabilities like battery storage,” Husain states. When there’s excess power, the SST can put it in storage and then release that energy when there’s more load and less renewable energy, like at night. “The solid-state transformer can manage power distribution so there’s always a balance between the load and the generation.”

Reza Ghorbani, professor in the Mechanical Engineering Department at the University of Hawaii at Manoa and Director of Renewable Energy Design, says, “Solid-state transformers can react very fast and seamlessly help to manage those variabilities, which is actually very important if you look at the time you need to react to those changes.“

An ideal application
Ghorbani concurs that SSTs have already proven themselves in one application. “They have been proven in electric vehicle charging stations. And similar technology can be used in the grid when you have lots of battery storage and DC sources. We will see more batteries in different parts of the grid — in homes, electrical vehicles connected to the grid or charging stations, commercial buildings, feeders, and substations.”

Concerning the use of DC power, Chakrabortty, says, “If you use a solid-state transformer, you can switch back and forth between AC and DC connections without causing any kind of instability or other troubles. That’s going to be a major thing because DC is much more efficient and less costly. If there’s any kind of device that lets our home use both types of connections, that could save a lot on electricity bills.”

Expanding on what Ghorbani says, Husain, explains. “A near-term application would be the EV fast chargers, like Tesla and others are putting up, massive-scale fast chargers 150 to 350 kilowatts.” SSTs will give bidirectional power flow, which means you can charge the vehicles, taking power from the grid as well as provide power into the grid. The FREEDM center has projects in the field demonstrating these technologies, including one funded by the Department of Energy Vehicle Technologies Office at a New York Power Authority facility in New York. 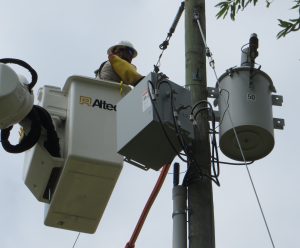 The Grid Energy Router by GridBridge (left box) is the first commercial product resulting from the transformer work. Courtesy GridBridge.

As a further testament to the success of the FREEDM Systems Center and the SST, a local startup company has spun off from it called GridBridge. Based in Raleigh, they have been acquired by ERMCO (Electric Research and Manufacturing Cooperative), a company based in Raleigh that manufacturers distribution transformers. They’re installing some solid-state transformers in the field for trials. The firm’s commercially available Grid Energy Router combines power electronics with software and communication capabilities. It is designed to improve distribution efficiency and control voltage and power factor while integrating renewable generation and energy storage. 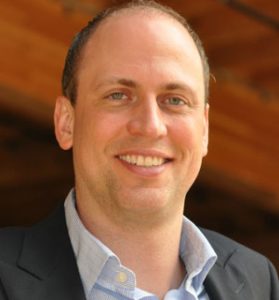 Chad Eckhardt, president of GridBridge, has an electrical engineering degree from the Milwaukee School of Engineering and an MBA fro Carnegie Mellon University

For the SST to become commercially viable, Husain believes, “Proving it in the field and bringing the cost down would be the two steps needed for their wide-spread application.” Chakrabortty adds, “At lab scale studies, we consider it ready, but to translate that into massive deployment in every house and neighborhood, that is going to take another couple of more years.”

With the progress made in SST development, the FREEDM Systems Center has enjoyed success. Husain notes, ”The center has grown in the sense that we’ve added more researchers and labs. We also have industry members, and they recruit the students, and we provide the workforce needed to serve these industries.”

It may not be long before we see solid-state transformers populating a smart grid fed by solar panels and wind turbines around the country. And we’ll have engineers and researchers at NCSU’s FREEDM Systems Center to thank.