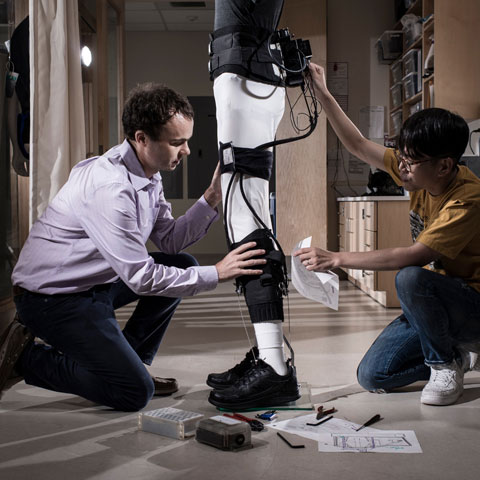 Ever suffer a leg or hip injury and wish you could strap on a pair of pants that would give you a boost and let you walk easier so you can do the things a healthy person does? Or maybe you just want to go a little faster and further on a long hike in the woods. Conor Walsh is pioneering just such a device for both situations.

It all started when Walsh was an undergraduate at Trinity College in Ireland studying engineering and he came across an article in New Scientist magazine. It talked about an exoskeleton designed as part of a DARPA (Defense Advanced Research Projects Agency) program, a robotic contraption that involved using rigid components strapped to your legs and arms to help you walk better.

“I think I was in my junior year, and it was the coolest thing ever,” he recalls. Early in his career, Walsh started working on hard exoskeletons, suits that have rigid members, as most practitioners followed this path in the field. He participated in a DARPA program himself in the early 2000s.

Then ten years later, he ventured in his own direction and created the field of soft wearable robotics, or soft exoskeletons. These robots are soft, lightweight, and flexible so people can wear them like the Spandex pants athletes wear. The exosuit could support soldiers as they walk, to increase their endurance, or it could help people with injuries or illness that have trouble walking.

At the young age of 35, Walsh is Assistant Professor of Mechanical and Biomedical Engineering at the John A. Paulson School of Engineering and Applied Sciences and a Core Faculty Member at the Wyss Institute for Biologically Inspired Engineering at Harvard University. Hailing from Dublin, Ireland he received his B.A.I. and B.A. degrees in mechanical and manufacturing engineering from Trinity College in Dublin in 2003.

Ventured to the states
“There wasn’t really anybody working on robotics in Ireland, so that’s when I looked to the U.S. for graduate school to get a PhD in the area of robotics,” Walsh recalls in describing why he ventured across the pond to pursue his mission. He would get his M.S. and Ph.D. degrees in Mechanical Engineering from the Massachusetts Institute of Technology in 2006 and 2010. He did his masters with Hugh Herr, learning about wearable robots. Herr heads the biomechatronics research group at the MIT Media Lab, which creates bionic limbs that emulate the function of natural limbs. “We were trying to make healthy people able to walk more efficiently and carry more weight. That was how I got excited about exoskeletons.”

Walsh’s design uses conventional components combined with new ones and algorithms he has developed.
Credit Wyss Institute at Harvard University

Why the attraction to wearable robotics? Walsh responds, “From the technological aspect, I like the idea of multidisciplinary projects that involve mechanical engineering but also electrical engineering and software algorithms. Bringing all those different parts together, that’s in essence what robotics is, and it’s something I always found fascinating.”

Goldfarb is a professor of mechanical engineering, electrical engineering, and physical medicine and rehabilitation and director of the Center for Intelligent Mechatronics at Vanderbilt University. His group develops robotic artificial legs for people with lower limb amputation, robotic arms for people with upper limb amputation, and lower limb exoskeletons for people with different neuromuscular impairments, specializing in hard exoskeletons. He knows Walsh through seeing him at technical meetings, hearing his presentations, seeing his work, and reading papers he publishes. Seeing him in action, Goldfarb observes, “Conor is very open and gregarious. He’s a straight shooter. His personality is low key and easy to interact with. But then on a technological level, he’s creative, innovative. It’s clear he wants to make an impact.”

Most of the work in wearable robotics has been done on hard exoskeletons, which are more powerful than the soft variety and cover the full leg, helping people who are fully paralyzed with a spinal cord injury walk again. Walsh explains. “We’re coming from an entirely different perspective and developing systems that don’t give as much resistance, so they’re not quite as powerful. They’re more suited for people who can walk but just not very well, such as someone who has suffered a stroke or an elderly person.”

In addition, Walsh sees potential in the area of sports and recreation, where textile suits can provide assistance during walking, hiking, running, and other activities. And, Walsh adds, “You’re going to see more and more industrial applications where people in factories are using it to help them perform their jobs better and safer.”

According to Steve Collins, “Prosthetics and exoskeletons is a hot topic at the moment. Lots of people are interested in it. Conor’s group and my group and a handful of others are the core research groups in this area in the world.” Collins is Associate Professor of Mechanical Engineering and  Director of the Experimental Biomechatronics Laboratory at Carnegie Mellon University, a school known for its robotics research. He knows Walsh from seeing him at conferences and visiting his lab.

Collins says that for soft exoskeletons, “The advantages are that you don’t have these heavy, bulky rigid elements that could cause a large penalty when you put the device on, that could interfere with other things you want to wear like clothing or footwear. You don’t have these big sharp things that could jam into your body. Of course, there are tradeoffs. With soft exosuits, there’s a limit to the force you can apply to the person’s body.”

Military focus
Angela Boynton, a mechanical engineer with the Biomechanics Team, Integrated Capability Enhancement Branch U.S. Army Research Laboratory-Human Research and Engineering Directorate Aberdeen Proving Ground, MD, adds, “People are soft. They’re not rigid. When you use hard structures with soft tissues, you end up with things like abrasions, blisters, and bruises. As one of the advantages of Conor’s system, particularly in a military environment, having those soft components eliminates those pressure points. The goal is actually to wear these for 72 hours. You can’t have a suit that is causing blisters and bruises on the person.”

Much of the work on soft exoskeletons has come through the DARPA Warrior Web project, which has the goal of helping soldiers walk long distances while carrying a heavy load. Boynton says her group has worked closely with Conor and his team for the last three years on this, evaluating prototypes they design. They’ve visited the Army facility five or six times with different generations of their systems.

Boynton reports, “I always try the suits on when they come, and the soldiers will too. We go through the woods in it and then provide feedback to Conor and his team about any issues.” How well do they work? “They do well. They’ve been very comfortable to wear. The actuation the system provides is awkward at first, but after you walk in them awhile, it gets to be a more natural feel. They’re still working with some things with uneven terrain, but they’re comfortable over a long period of time carrying a load.”

Collins calls developing soft exoskeletons “a tricky problem, and they’ve come up with some good solutions with how to transmit load to the body.” He notes that Conor employs a couple of full-time fabric professionals that came out of fashion school. They try lots of different patterns of fabric and strapping and webbing to find things that are comfortable transmitting big forces to the person’s body. “That’s been a big contribution. He’s shown that you can apply big enough moments about the joints to provide people with a benefit. Conor has shown that with their soft exoskeleton, they can reduce the energy costs of walking by about the same amount as hard exoskeletons.”

Walsh’s lab has produced a suit made of nylon, polyester, and Spandex that straps around the user’s hips and thighs and connects to boots at the heel. When the person walks, a computer processor tracks the user’s gait and signals a system of motors and pulleys on cables strapped at the hips to provide bursts of power. The cables operate much like brake and shifting cables on a bicycle.

Sensors on the person measure their pace, and an algorithm commands the system to pull when it should. The systems are flexible because they’re all software driven, so you can change the software and how you interact with somebody. Rigid exoskeletons usually include sensors such as encoders or potentiometers in robotic joints that track joint angles, but these technologies are not compatible with soft structures. Walsh has had to design new sensors that integrate into wearable garments. In addition, they use other off-the-shelf sensor technologies such as gyros, pressure sensors, and inertial measurement units (IMUs).

For upper extremities, Walsh uses fluids-based actuation, either air or water, similar to pneumatics and hydraulics, where they have a small pump worn at the user’s waist or mounted on a wheelchair. Flexible tubes go to soft actuators made from silicon that mount on the person’s hands. One advantage of Walsh’s actuators is that because they mount at the waste or in a backpack, they don’t add weight to the extremities being assisted.

Goldfarb comments that most wearable robotics technology comes out of academia, and then they make it commercially available by licensing to a company with a presence in the market. The soft exosuits should follow the same path. He says this fits well with Walsh’s approach to research. “One thing I like about Conor’s work is that it’s appropriately sophisticated, but he has worked hard to make it practical, to make it easy to don and doff. If it can benefit somebody, he wants to get it out there. He doesn’t want to keep it between the covers of a journal paper.”

True to that reasoning, Walsh has founded the Harvard Biodesign Lab, which brings together researchers from the engineering, industrial design, apparel, clinical, and business communities to develop new technologies and translate them to industrial partners. “It has worked out very well,” Walsh reports. “We have people from mechanical engineering, electrical engineering, software, physiology, physical therapy, biomechanics, and apparel design. A very diverse set of disciplines and skillsets.” No commercial ventures have resulted yet, but the group thinks some opportunities will come about in the next year or two.

Walsh has his own take: “You see a lot more academic researchers working in this area, and you’re starting to see more and more companies and industrial activities as well. Both of those moving forward together is exciting.” And it justifies his decision to travel far from home to pursue his engineering passion.