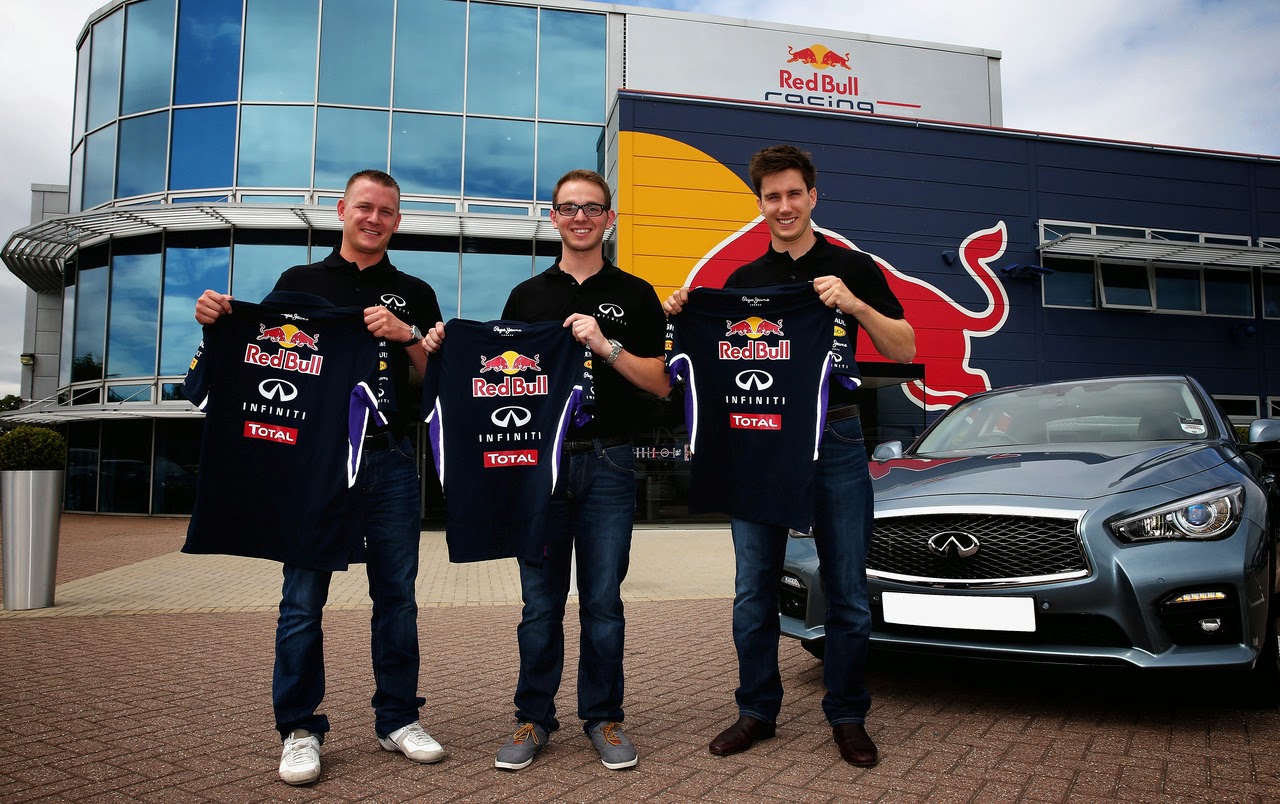 Infiniti has announced the winners of its global talent search initiative that will see three engineering students given a career opportunity with Formula One team Infiniti Red Bull Racing. After a grueling three-day world final event in the UK that saw 12 hopefuls from around the world competing for victory in the Infiniti Performance Engineering Academy, William Priest from Chesham, Buckinghamshire, UK; Eric LaRoche from Hamilton Square, New Jersey; and Jason Zide from Laguna Beach, California were deemed the winners. They were judged by a panel of senior engineering personnel from Infiniti and the race team, led by Chief Technical Officer Adrian Newey. Along with a 12-month work placement with the team beginning in September, the winners will receive accommodation in the UK, an Infiniti company car, and full salary.
With the in-depth assessment process split between Infiniti’s Technical Center in Cranfield, UK and Infiniti Red Bull Racing in Milton Keynes, UK, the final candidates, selected from over 1,500 entrants across 100 top engineering universities worldwide, faced a series of challenges over three days relating to road car and racing car engineering. These included practical design tasks, written exams, intense interviews, and complex group exercises to test their technical ability, teamwork skills, and performance under pressure. In one task they even got a first-hand insight into the role of a race engineer by working alongside four-time World Champion and Infinti’s Director of Performance Sebastian Vettel in the team’s simulator.
Commenting on the conclusion of the process, Andreas Sigl, global director, Infiniti Formula One, said, “William, Eric and Jason impressed us all throughout the process, especially given the stiff competition they had from the other candidates. They demonstrated not just a natural aptitude for engineering and an excellent work ethic, but also a real understanding of the benefits Formula One can bring a road car company like Infiniti and the potential for even greater technical crossover in the future. We’re delighted to have given them the opportunity to realize their dream and will be working closely with them as they settle into their new role.”
William Priest, 23, studies mechanical engineering at the University of Exeter. Enthusiastic about motor sports, the British student previously gained experience working as a race engineer with the TH Motorsport British Touring Car team where he assisted the setup and preparation of the race cars. Familiar with Infiniti Red Bull Racing, he also spent two weeks working with the Formula One World Champions in the design department.
Eric LaRoche, 25, studies mechanical and aerospace engineering at the University of Maryland. He has a passion for motor sports and aviation and, in addition to participating as lead aerodynamicist with the University of Maryland’s Formula SAE team, has gained experience with Chrysler’s Viper GTS-R team in the American Le Mans Series and worked at aviation giant Boeing.
Jason Zide, 21, studies mechanical engineering at the University of Southern California. He is team captain of a Formula SAE team and is familiar with the Infiniti family, having completed work experience with the auto brand at its North American Technical Center.