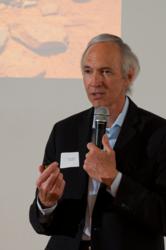 Green building and sustainability consultant Jerry Yudelson has released his annual list of “Top 10 MegaTrends” for the green building industry. Yudelson says, “It looks like a good year ahead for the green building industry. Based on our experience, it seems clear that green building will continue its rapid expansion globally in 2013 in spite of the ongoing economic slowdown in most countries of Europe and North America. More people are building green each year, with 50,000 LEED projects underway by the latest counts; there is nothing on the horizon that will stop this mega-trend or its constituent elements.”
Yudelson’s “Top Ten Green Building MegaTrends” for 2013 include:
1.    Green building in North America will rebound strongly in 2013, in terms of LEED project registrations. Yudelson says, “Even with commercial and governmental projects proceeding at a lower level, there should be faster growth in green retrofits, with surging college and university projects, along with NGO activity.”
2.    The focus of the green building industry will continue its switch from new building design and construction to greening existing buildings. The fastest growing LEED rating system the past three years has been LEED for Existing Buildings Operations and Maintenance (LEED O+M), with cumulative floor area in these certified projects now greater than in new construction.
3.    Green Buildings will increasingly be managed in the “cloud,” represented by the large number of new entrants and new products in fields of building automation, facility management, wireless controls, and building services information management in 2011 and 2012. Yudelson says, “2013 could well become ‘The Year of the Cloud’ for how quickly this trend will manifest.”
4.    Awareness of the coming crisis in fresh water supply, both globally and in the United States, will increase. Leading building designers, owners, and managers will be moved to take further steps to reduce water consumption in buildings by using more conserving fixtures, rainwater recovery systems, and innovative new onsite water technologies.
5.    The global green building movement will continue to accelerate, as more countries begin to create their own green building incentives and developing their own green building councils. Nearly 90 countries with incipient or established green building organizations, on all continents, will drive considerable global green building growth in 2013. At the end of 2012, 40 percent of all LEED-registered projects were located outside the United States. LEED projects are now being pursued in more than 130 countries, with LEED’s Alternative Compliance Path serving to facilitate the process.
6.    Zero-net-energy buildings will become increasingly commonplace, in both residential and commercial sectors, as LEED and ENERGY STAR certifications and labels have become too commonplace to confer competitive advantage among building owners. Developers of speculative commercial buildings will also begin to showcase zero-net-energy designs to gain marketplace advantages.
7.    Green Building Performance Disclosure will be the fastest emerging trend, highlighted by new carbon reductions requirements in California (AB 32), the City of Seattle, and many other jurisdictions. Commercial building owners will have to disclose actual green building performance to all new tenants and buyers and, in some places, to the public at large.
8.    Transparency and “Red List” chemicals will become increasingly a subject of contention, as manifested through such tools as the new Health Product Declaration and the inclusion of points for avoiding certain chemicals contained in LEEDv4, currently scheduled for release in June 2013. Environmental and Health Product Declarations will begin to appear in large numbers in the next two to three years, as building product manufacturers increasingly try to gain or maintain market share based on open disclosure of chemical ingredients.
9.    Local and state governments will step up their mandates for green buildings for both themselves and the private sector. There should be at least 20 new cities of significant size with commercial sector green building mandates, mostly in the “blue” states. The desire to reduce carbon emissions by going green will lead more government agencies, universities, hospitals, and corporate owners to require green buildings from design and construction teams.
10.    Solar power use in buildings will continue to grow, given the prospect of increasing focus on implementing aggressive state-level renewable power standards (RPS) for 2020 and the move toward zero-net-energy buildings. As before, third-party financing partnerships will continue to grow and provide capital for large rooftop systems on warehouses and retail stores, as well as on homes.
Jerry Yudelson is founder and lead consultant of Yudelson Associates, an international sustainability and green building consultancy in Tucson, AZ. A LEED Fellow, Yudelson, has authored 13 green building books and chaired the country’s largest annual green building conference, Greenbuild, for six years. For more information, visit www.greenbuildconsult.com.