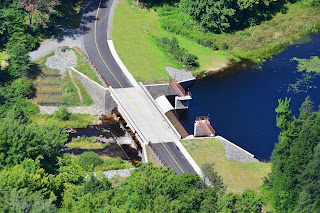 Promised Land State Park is located in the heart of the Delaware State Forest in Pike County, PA. The park offers 3,000 acres of land for fishing, hiking, camping, horseback riding, and ice skating. In addition to over 220 campsites, Promised Land State Park has two lakes containing various forms of aquatic life.
In 2006, it became apparent that the bridge and dam over Lower Lake in the park needed to be replaced. Originally built in 1958, the structures were deteriorating. The Pennsylvania Department of Conservation and Natural Resources called on Larson Design Group (LDG) to design the replacement of the three-span bridge located over a concrete dam and the lake. The challenge was to maintain public access to the state park’s 220 campsites and maintain water levels in the 250-acre lake throughout the design and construction of the new bridge.
David Gunsallus, P.E., was the senior project manager overseeing the new design. “It was determined that the project would be constructed in three phases to maintain traffic and water levels in the lake during construction,” says Gunsallus. “The most economically-feasible solution was to reduce the proposed bridge to a single span and rehabilitate the existing spillway and weir. Environmentally, the project did not disturb any additional area beyond what was disturbed during the original construction of the dam and bridge in 1958.”
Environmental impacts were significantly reduced by not draining the lake. Had it been drained, aquatic ecosystems within the lake as well as dependent non-aquatic species outside of it would have been affected. Despite the challenges surrounding the project, construction costs came in $445,000 under budget. Renovations were completed in August of 2012.
On April 15, 2013, the Susquehanna Chapter of the Association for Bridge Construction and Design (ABCD) honored LDG as the winner of the Medium Span Bridge category at ABCD’s annual awards ceremony. Gunsallus appreciated the recognition. “It’s always an honor to have your team’s work recognized, particularly when the project was as challenging as this one.” Schnabel Engineering acted as the dam engineering subconsultant to LDG on this project.
Larson Design Group is a growing multi-discipline architecture, engineering, and surveying firm providing design solutions for the private and public sectors. With 10 offices in Pennsylvania, New York, West Virginia, and Texas, LDG staff members have knowledge in environmental systems, energy, surveying, site development, structures, transportation, and inspection.