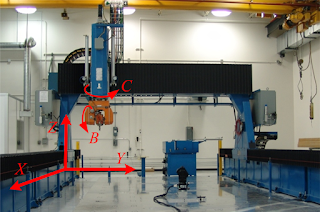 Fixing flaws introduced during the machining of large components used in the aircraft and heavy equipment industries can be time-consuming for manufacturers and costly if they must scrap the flawed parts after they’ve been fabricated. A new approach developed by researchers at Missouri University of Science and Technology is helping manufacturers eliminate those flaws before the parts are created.

Writing in the February 2017 issue of the Journal of Manufacturing Science and Engineering (JSME), the Missouri S&T researchers describe an approach that can greatly improve the accuracy of five-axis machine tools used to fabricate large parts. Five-axis machine tools are computer-numerically controlled (CNC) machines that can move, cut, or mill a part on five different axes at the same time. This allows manufacturers to create complex contours or curves when creating a large part such as an aircraft wing.

“Five-axis machine tools are known to have 41 basic geometric errors,” says Jennifer Creamer, a Ph.D. student in mechanical engineering at Missouri S&T and the lead author of the JMSE paper. As Dr. Robert Landers, professor of mechanical and aerospace engineering and a co-author of the paper, puts it, “The way you want the machine to move when making a large part is different than the way it actually moves due to inherent geometric errors.” Because of these errors, manufacturers must make adjustments in calibrating their CNC machines.

Several different approaches exist to help compensate for those errors, but none of them provides a complete picture, Creamer says. Manufacturers must combine various methods to get the best sense of a milling problem. The result, she says, is “a piecemeal approach that makes calibration a time-consuming and expensive process.” In her research, Creamer set out to find a way to eliminate that piecemeal approach and develop a new model for capturing complicated geometric errors while also automatically generating compensation tables for those errors. A compensation table is a kind of map of errors that can be programmed into a CNC machine to reduce errors.

Flaws in the fabrication of large parts may seem insignificant given the large size of the parts, but they can cause problems. Parts for airplanes, for example, can be 120 feet long, and their size can make holding tight tolerances problematic, Landers says. In Creamer’s research on five-axis machine tools, “She’s trying to hold errors to five thousandths of an inch over 120 feet,” he says.

In collaboration with colleagues at Boeing Research and Technology in St. Louis, where she works as an engineer, Creamer used a laser tracker to quickly measure the motion of all axes over the entire workspace of an industrial five-axis machine. Based on these measurements, she generated a set of compensating tables that could be used to improve the accuracy on a variety of machine tools and related platforms.

Creamer’s paper, titled “Table-Based Volumetric Error Compensation of Large Five-Axis Machine Tools,” was originally published online in September 2016 (https://manufacturingscience.asmedigitalcollection.asme.org/article.aspx?articleID=2543543). Co-authors with Creamer are Landers; Dr. Patrick Sammons, who earned his Ph.D. from Missouri S&T in 2016 and is now a postdoctoral researcher at the University of Michigan; Dr. Douglas Bristow, associate professor of mechanical and aerospace engineering at Missouri S&T; Dr. Philip Freeman, senior technical fellow at Boeing; and Samuel Easley, an engineer at Boeing. The research is supported by Missouri S&T, the Boeing Company, and Missouri S&T’s Center for Aerospace Manufacturing Technologies.

Creamer is also supported through a GAANN Fellowship at Missouri S&T. GAANN (Graduate Assistance in Areas of National Need) is a U.S. Department of Education program designed to encourage more graduate-level education in areas of national need.