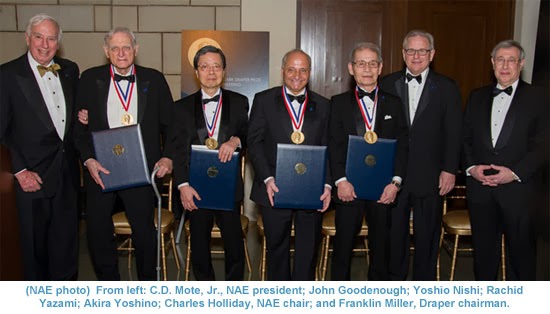 The National Academy of Engineering (NAE) presented its highest honor to the engineers who laid the groundwork for today’s lithium ion battery during a recent ceremony in Washington, D.C.. The NAE honored John Goodenough, Rachid Yazami, Akira Yoshino, and Yoshio Nishi with the Charles Stark Draper Prize for Engineering, which annually recognizes engineers whose accomplishments have significantly benefited society and is considered the Nobel Prize of engineering. Now in its 25th year, the prize includes a $500,000 award.

“For the past 25 years, the Draper Prize for Engineering has given us the opportunity to reflect not only on the technology developments that have initiated technical revolutions in areas as broad reaching as communications, computing, transportation, and bioengineering, but to honor and celebrate the engineers that have made those revolutions possible,” says Jim Shields, Draper Laboratory president. “Without these remarkable individuals, much that we take for granted in our day-to-day lives would not exist.”

Thirty five years ago, Goodenough demonstrated the feasibility of a rechargeable lithium ion battery at four volts with the use of lithium cobalt oxide as the positive node. In 1980, Yazami showed that graphite could be used as the battery’s negative node. Yoshino assembled the first prototype lithium ion battery in 1985, and six years later, Sony released the first commercial lithium ion battery, with research, development, and production led by Nishi. The market for lithium ion batteries, an important feature in devices such as laptops, smartphones, hearing aids, and electric cars, is projected to reach nearly $60 billion by 2020, according to an IHS iSuppli study.

The Charles Stark Draper Prize was established and endowed by Draper Laboratory in 1988 in tribute to its founder, Dr. Charles Stark Draper, who pioneered inertial navigation. It honors those who have contributed to the advancement of engineering and public understanding of the importance of engineering and technology. Previous winners over the past 25 years include the inventors of the mobile phone and supporting infrastructure, the World Wide Web, GPS, and the turbojet engine.