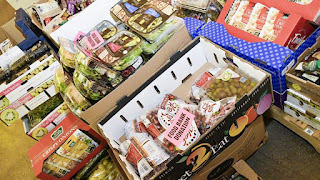 Researchers at North Carolina State University have developed new computer models to improve the ability of food banks to feed as many people as possible, as equitably as possible, while reducing food waste. Food banks serve as networks, collecting food from many different sources and distributing it to local agencies that then share it with people in need. The researchers, who launched this project eight years ago, quickly realized that there is a great deal of uncertainty in food bank operations. Supply and demand both fluctuate, which researchers anticipated.
“But we found that capacity – the ability of local agencies to collect, transport, store and distribute food – was also variable,” says Julie Ivy, a professor of industrial and systems engineering at NC State and co-author of a paper on the work. “These agencies are often small and rely heavily on volunteers. “Our goal was to develop models that account for uncertainty in a food bank network’s capacity and can help food banks distribute food efficiently and equitably – ensuring all of the regions served by the food bank are treated fairly – while minimizing food waste.”
“Our work here was conducted with the Food Bank of Central and Eastern North Carolina, but these are challenges that are common to most, if not all, food banks, as well as for national food collection and distribution networks, such as Feeding America,” says Irem Sengul Orgut, a former Ph.D. student at NC State and lead author of the paper. Orgut now works for Lenovo.
For this project, the researchers developed two models, which can be used in conjunction with each other. The first model uses historical data to establish ranges of how much capacity each county has. The model then uses those ranges, in conjunction with each county’s needs, to determine how food supplies should be distributed. The second model takes into account each county’s need and capacity – or ability to distribute food in a timely way – to try to feed as many people as possible, as equitably as possible, across counties before the food goes bad.
“Some counties have agencies with more volunteers, more refrigerated storage, or better transportation resources, allowing them to distribute more food before it goes bad,” says Reha Uzsoy, a co-author of the paper and Clifton A. Anderson Distinguished Professor in NC State’s Edward P. Fitts Department of Industrial & Systems Engineering. “But if those counties get all the food, it wouldn’t be equitable – other counties would suffer. The second model aims to find the best possible balance of those two factors.”
“We now have these two models, which are pretty complex,” Ivy says. “We’re currently working with the Los Angeles Regional Food Bank and the Food Bank of Central and Eastern North Carolina to find ways to implement the models that are user friendly for food bank staff and volunteers.”
Specifically, the researchers are working with North Carolina A&T University and a company called Performigence to develop software that can be used to expand these models and put them into use. That work is being done with support from the National Science Foundation, under a grant titled PFI:BIC – Flexible, Equitable, Efficient, and Effective Distribution (FEEED).
“This work is relevant to food banks, broadly, but the fundamental issues are also relevant to disaster relief efforts,” Ivy says. “Really, any situation in which there is a scarce resource, a need for equity, and a robust suite of challenges in distributing the resource. As a result, this may also be of interest to disaster relief researchers.”