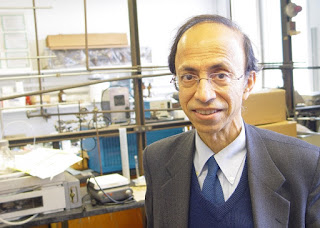 Kamalesh Sirkar, a chemical engineer at New Jersey Institute of Technology (NJIT), has won the 2017 Alan S. Michaels Award for Innovation in Membrane Science and Technology. Sirkar is known for his innovations in industrial membrane technology used to separate and purify air, water, and waste streams and to improve the quality of manufactured products such as pharmaceuticals, solvents, and nanoparticles. The award, given every three years by the North American Membrane Society (NAMS), is named for Alan Michaels, a pioneer in the field credited with breakthroughs in ultrafiltration technology and major contributions to controlled-release drug delivery systems, among other areas.

In honoring Sirkar, a professor of chemical engineering at NJIT, the membrane society pointed to his “long and distinguished career that has included making fundamental contributions to the field of membrane science and engineering, from membrane fabrication to transport processes and performance of membrane systems, and his lifelong service to the membrane separations community.”

Sirkar holds 31 U.S. patents and three in Canada. He is best known for developing the concept of membrane contactors, a process that permits two phases that do not mix, such as two liquids or a liquid and a gas, to contact each other at the pores of a membrane – without dispersing into each other – to introduce or extract specific compounds across it. The technology is used, for example, to introduce carbon dioxide into beverages, to produce concentrations of oxygen at much less than 1 part per billion in ultrapure water needed for semiconductor production, and to extract valuable pharmaceuticals in aqueous-organic extraction systems, among other separation or purification processes. He also developed a novel membrane distillation technology capable of converting sea and brackish water into potable water with a considerably higher water recovery rate than the standard method, reverse osmosis.

NAMS cited his service to the community, including his “seminal contributions” of two books “that serve as references to the community.” He co-edited with Winston Ho the Membrane Handbook in 1992, considered a standard for membrane separations, and recently wrote the more general Separation of Molecules, Macromolecules and Particles: Principles, Phenomena and Processes in which he integrates membranes with classical chemical engineering processes. He has served on the editorial board of the Journal of Membrane Science since 1989 and is the founding editor-in-chief of “Current Opinion in Chemical Engineering” since 2011.

Sirkar, who was elected to the NAMS board of directors in 1996 and served a one-year term as president beginning in 1998, worked with Michaels, who was also a member of the board. “He was a towering figure in our young membrane community who invented a series of membranes for ultrafiltration-based separation of proteins and macromolecules having different molecular weights,” Sirkar recalled. “That was the second big breakthrough in the field of membrane technology, the first being the Loeb-Sourirajan reverse-osmosis membranes for desalination.” He added, “He appeared to be particularly fond of the membrane solvent extraction technique that I developed. In fact, he published a paper utilizing that technique in 1992.”

Looking back on the evolution of his field, Sirkar pointed to a number of successes in addition to reverse osmosis, desalination, and ultrafiltration, including kidney dialysis, membrane separation of air, natural gas and organic vapors, electrodialysis, and the development of membrane bioreactors for water treatment, among others.

The award consists of a $10,000 prize and lifetime membership in NAMS.

As a public technological university, NJIT is a research university with an enrollment of 11,400 graduate and undergraduate students. NJIT specializes in fields such as solar research, nanotechnology, resilient design, tissue engineering, and cybersecurity. NJIT is among the top U.S. polytechnic public universities in research expenditures, exceeding $130 million, and is among the top 1 percent of public colleges and universities in return on educational investment, according to PayScale.com