Searching for new bridge forms that can span further 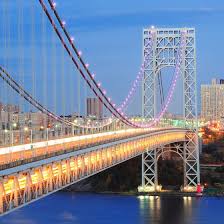 Newly identified bridge forms could enable significantly longer bridge spans to be achieved in the future, potentially making a crossing over the Strait of Gibraltar, from the Iberian Peninsula to Morocco, feasible. The new bridge forms – identified by a team of researchers from the University of Sheffield and Brunel University London, working with long-span bridge expert Ian Firth of engineering consultants COWI – use a new mathematical modeling technique to identify optimal forms for very long-span bridges. The research was published recently in the Proceedings of the Royal Society.

A bridge’s span is the distance of suspended roadway between towers, with the current world record standing at just under 2km. The most popular form for long spans is the suspension bridge form, as used for the Humber Bridge, though the cable-stayed bridge form, where cables directly connect the tower to the roadway – such as used in the recently constructed Queensferry Crossing in Scotland – is becoming increasingly popular.

As bridge spans become longer, a rapidly growing proportion of the structure is needed just to carry the bridge’s own weight, rather than the traffic crossing it. This can create a vicious cycle: a relatively small increase in span requires significantly more material, leading to a heavier structure that requires yet more material to support it. This also sets a limit on how long a bridge span can be; beyond this limit a bridge simply cannot carry its own weight.

One option is to use stronger, lighter materials. However, steel remains the preferred choice because it is tough, readily available, and relatively cheap. So the only other way to increase span is change the bridge’s design.

Professor Matthew Gilbert from the University of Sheffield, who led the research, says, “The suspension bridge has been around for hundreds of years and while we’ve been able to build longer spans through incremental improvements, we’ve never stopped to lsee if it’s actually the best form to use. Our research has shown that more structurally efficient forms do exist, which might open the door to significantly longer bridge spans in the future.”

The technique devised by the team draws on theory developed by Professor Gilbert’s namesake, Davies Gilbert, who in the early 19th Century used mathematical theory to persuade Thomas Telford that the suspension cables in his original design for the Menai Strait bridge in North Wales followed too shallow a curve. He also proposed a “catenary of equal stress” showing the optimal shape of a cable accounting for the presence of gravity loads.

By incorporating this early 19th century theory into a modern mathematical optimization model, the team has identified bridge concepts that require the minimum possible volume of material, potentially making significantly longer spans feasible. The mathematically optimal designs contain regions which resemble a bicycle wheel, with multiple “spokes” in place of a single tower. But these would be very difficult to build in practice at large scale. The team therefore replaced these with split towers consisting of just two or three “spokes” as a compromise that retains most of the benefit of the optimal designs,while being a little easier to construct. 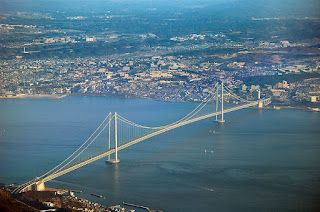 For a 5km span, which is likely to be required to build the 14km Strait of Gibraltar crossing, a traditional suspension bridge design would require far more material, making it at least 73 percent heavier than the optimal design. In contrast, the proposed two- and three-spoke designs would be just 12 and 6 percent heavier, making them potentially much more economical to build.

The new bridge forms require less material principally because the forces from the deck are transmitted more efficiently through the bridge superstructure to the foundations. This is achieved by keeping the load paths short and avoiding sharp corners between tensile and compressive elements.

The team emphasises that their research is just the first step and that the ideas cannot be developed immediately for construction of a mega-span bridge. The current model considers only gravity loads and does not yet consider dynamic forces arising from traffic or wind loading. Further work is also required to address construction and maintenance issues.

Co-author Ian Firth from COWI says, “This is an interesting development in the search for greater material efficiency in the design of super-long span bridges. There is much more work to do, notably in devising effective and economic construction methods, but maybe one day we will see these new forms taking shape across some wide estuary or sea crossing.”

The research, funded by the Engineering and Physical Sciences Research Council (EPSRC), was also presented at “Tomorrow’s Megastructures,” a symposium organized by the International Association for Bridge and Structural Engineering.