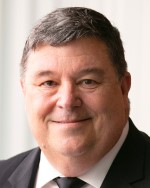 Stan Brown has worked in local government for more than 34 years, holding various public works, engineering, and management positions in Georgia, Colorado and Wyoming. He is a licensed professional engineer in the state of Georgia, and a retired Lieutenant Colonel in the U.S. Air Force Reserve whose military service included deployments to Iraq, Kuwait and Kyrgyzstan. He was awarded the U.S. Army’s Bronze Star medal for exceptional and meritorious service as a facility engineer commander during Operation Iraqi Freedom. He retired in 2020 as city manager for the City of Oakwood after 16 years, and also worked with the Carl Vinson Institute of Government at the University of Georgia providing instruction to local government elected officials and staff members on public works-related topics. He continues to serve local governments and public works agencies as a consultant with the Georgia Municipal Association.

“I want to promote the profession of public works,” says President Brown. “I am proud of the services we provide. I am proud of every single public works servant, supplier and support agency. It takes both public and private sector dedication to accomplish our task. Our services are so basic, so important yet so overlooked. I hope to be a voice to promote our profession and to recognize those that are in the trenches making it happen.”

“I am very much looking forward to working with Stan Brown, who brings a wealth of knowledge and expertise in not only city government, public works, leadership but also in association management,” said APWA Chief Executive Officer Scott Grayson, CAE. “Having worked with Stan for the past several years on the board and on APWA’s strategic planning, I know that he will serve the 30,000 members of APWA extremely well.”