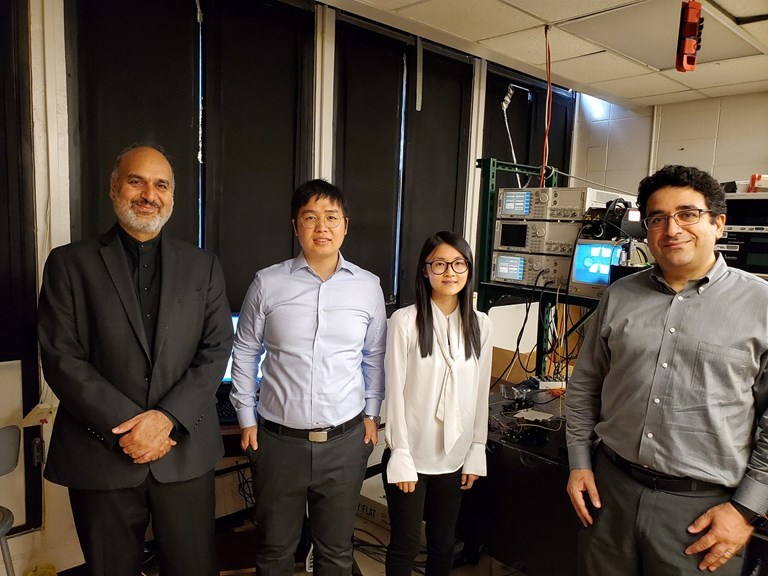 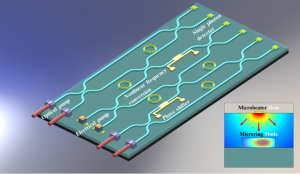 By Xi-Cheng Zhang, University of Rochester

Researchers have created a silicon carbide (SiC) photonic integrated chip that can be thermally tuned by applying an electric signal. The approach could one day be used to create a large range of reconfigurable devices such as phase-shifters and tunable optical couplers needed for networking applications and quantum information processing. Although most optical and computer chips are made of silicon, there is increasing interest in SiC because it exhibits better thermal, electrical and mechanical properties than silicon while also being biocompatible and operating at wavelengths from the visible to infrared.

In The Optical Society (OSA) journal Optics Letters, researchers led by Ali Adibi from the Georgia Institute of Technology detail how they integrated a microheater and an optical device called a microring resonator onto a SiC chip. The accomplishment represents the first fully integrated and thermally tunable SiC optical switch that operates at near-infrared wavelengths. “Devices such as the one we demonstrate in this work can be used as building-blocks for next-generation quantum information processing devices and to create biocompatible sensors and probes,” says the paper’s first author Xi Wu.

SiC is particularly attractive for quantum computing and communication applications because it has defects that can be optically controlled and manipulated as quantum bits, or qubits. Quantum computing and communication promises to be significantly faster than traditional computing at solving certain problems because data is encoded in qubits that can be in any combination of two states at once, allowing many processes to be performed simultaneously. 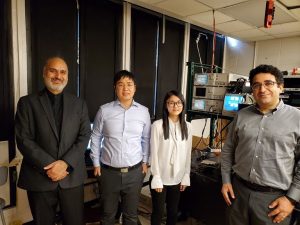 Wafer-level manufacturing
The new work builds on the researchers’ previous development of a platform called crystalline SiC-on-insulator that overcomes some of the fragility and other drawbacks of previously reported SiC platforms while providing an easy and reliable route for integration with electronic devices. “The SiC-on-insulator platform our group pioneered is similar to the silicon-on-insulator technology widely used in semiconductor industry for a variety of applications,” says Tianren Fan, member of the research team. “It enables wafer-level manufacturing of SiC devices, paving the way toward commercialization of integrated photonic quantum information processing solutions based on SiC,” says Ali A. Eftekhar, member of the research team.

Fully exploiting the new platform’s unique capabilities required developing the ability to tune its optical properties so that a single chip-based structure can be used to provide different functions. The researchers accomplished this by using the thermo-optic effect in which changing a material’s temperature modifies its optical properties, such as refractive index. They began by fabricating tiny ring-shaped optical cavities, or microring resonators, using the crystalline SiC-on-insulator technology. In each resonator, light at certain wavelengths, called its resonance wavelengths, traveling around the ring will build up strength through constructive interference. The resonator then can be used to control the amplitude and phase of the light in a waveguide coupled to it. To create a tunable resonator with a high degree of control, the researchers fabricated electric heaters on top of the microrings. When an electric current is applied to the integrated microheater, it locally increases the temperature of the SiC microring and thus changes its resonant wavelengths thanks to the thermo-optic effect.

Testing the integrated device
The researchers tested the performance of the fabricated integrated microring resonators and microheaters by applying different levels of electrical power and then measuring the optical transmission of the waveguide coupled to the microring resonator. Their results showed that it is possible to achieve high-quality resonators with low-power thermal tunability through a robust device that can be manufactured using existing semiconductor foundry processes.

“Combined with other unique features of our crystalline SiC-on-insulator platform, these high-quality devices have the basic requirements for enabling new chip-scale devices that operate in a wide range of wavelengths,” says Ali Adibi, the team leader.  “This chip-scale tunability is essential for performing quantum operations necessary for quantum computing and communication. In addition, because of the biocompatibility of SiC, it could be very useful for in vivo biosensing.”

The researchers are now working to build elements with the crystalline SiC-on-insulator platform for quantum photonic integrated circuits, including on-chip pump lasers, single photon sources and single photon detectors that could be used with the tunable microring resonator to create a fully functional chip for advanced optical quantum computing.