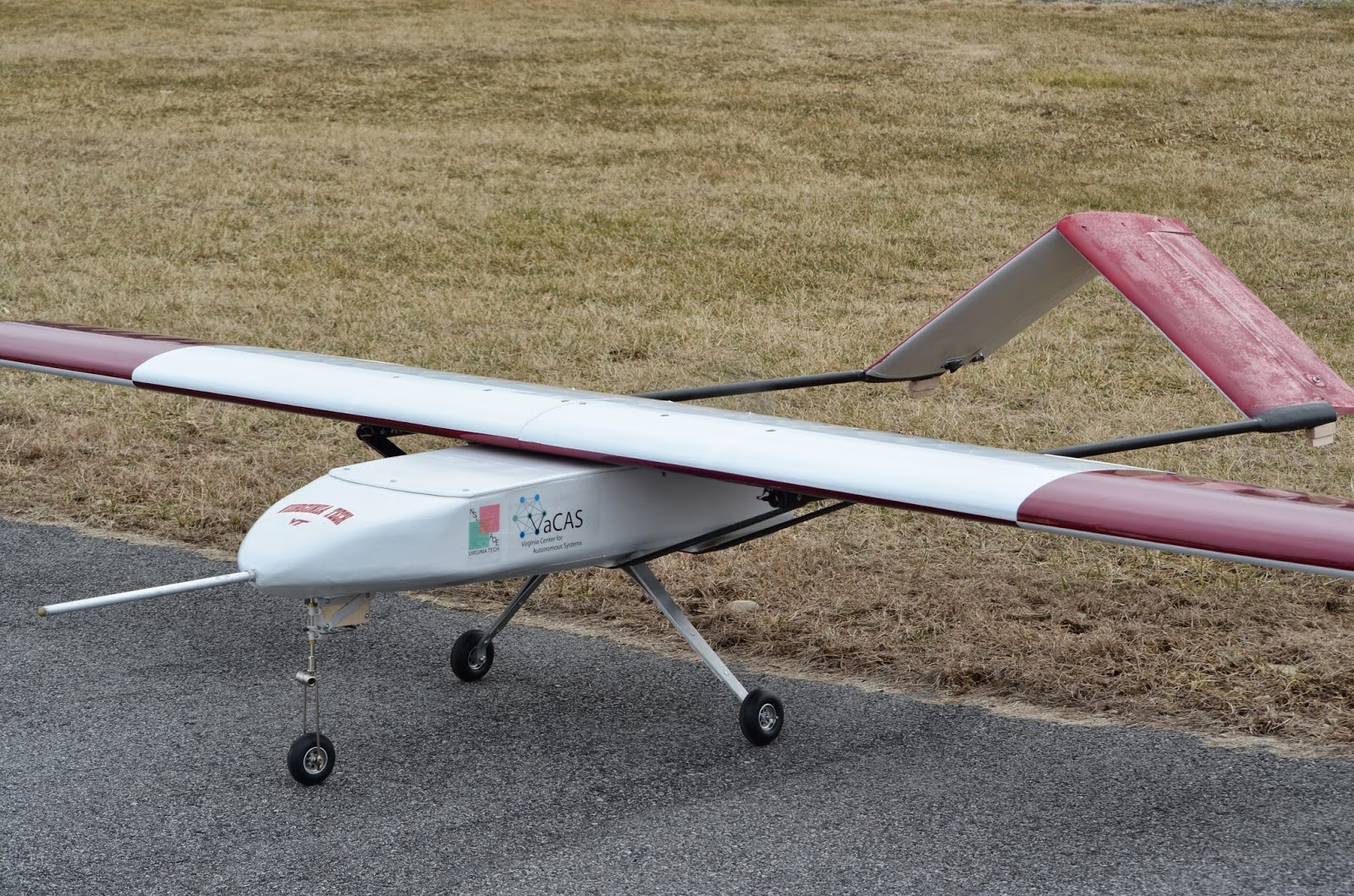 Led by a staff engineer, Virginia Tech students have redesigned an existing unmanned aircraft system by changing its power source and making it more reliable. Called the electric Small Platform for Autonomous Aerial Research Operations (eSPAARO), the new plane is powered by electricity instead of gasoline.The design is a revision of the Small Platform for Autonomous Aerial Research Operations, a fixed-wing airplane developed by Virginia Tech students in 2009.
The new design was completed by John Coggin, chief engineer with the Virginia Tech Unmanned Aircraft Systems Test Site; Chris Kevorkian of Roanoke, VA, a master’s student in aerospace engineering; and Jeff Brown of Manassas, VA and Sean Lynch of Hackettstown, NJ, both seniors in aerospace engineering.
The plane is a research platform for the aerospace engineering department and for the Mid-Atlantic Aviation Partnership, a consortium of about 35 government, academic, and industry groups led by Virginia Tech to help further introduce unmanned aircraft into the national airspace. In addition to making the plane more reliable, the wing loading was reduced by 59 percent, stall speed was reduced by 30 percent, and airframe weight decreased by 10 pounds.
The engineers say the new design adds safety and reliability, is easy to setup and repair, and offers a replaceable wing and more payload options and easier payload access. “The aircraft is a tremendous asset for the Unmanned Aircraft Systems Test Site operation in particular and for Virginia Tech’s Unmanned Aircraft Systems research program in general,” says Jon Greene, the associate director for Strategic Planning and Development at the Institute for Critical Technology and Applied Science.
“This vehicle gives us the ability to integrate a wide range of sensor and other payload technologies into a proven, reliable aircraft quickly and inexpensively. Additionally, electric propulsion provides tremendous advantages in terms of noise, reliability, risk reduction, and replacing an internal combustion engine with a cleaner, more efficient electric system makes sense across a whole range of considerations.”
The plane has been tested for endurance and operational features at the Kentland Experimental Aerial Systems Lab. The work  is part of a proposal called “Unmanned Aerial System Airworthiness: A Case Study in Safety Certification for Complex, Non-Deterministic Systems,” by Craig Woolsey, director of the Virginia Center for Autonomous Systems and an associate professor of aerospace and ocean engineering. Other investigators include Christopher Roy, a professor in aerospace and ocean engineering, and Patrick Roberts, an associate professor with the Center for Public Administration and Policy; along with assistant professor Mazen Farhood, associate professor Leigh McCue-Weil, and associate professor Mayuresh Patil, all with the Department of Aerospace and Ocean Engineering.
The proposal was funded by the Institute for Critical Technology and Applied Science and is a step toward developing a multidisciplinary research center that will promote the development of a commercial autonomy industry. Mark Palframan and Lawrence Hale, two aerospace engineering Ph.D. students in the Nonlinear Systems Lab, are working on methods to quickly and easily quantify and analyze uncertain unmanned aerial system controllers using the platform.
Otherwise known as autopilots, these small unmanned aircraft controllers can be prohibitively costly to validate for unmanned aerial systems with low price points. One way to lower development time and costs is to better simulate and quantify uncertainty in these small aircraft.The overall goal of the program is to develop uncertainty quantification methods, and create policy development guidance for risk assessment, risk mitigation, and safety certification of autonomous vehicles.