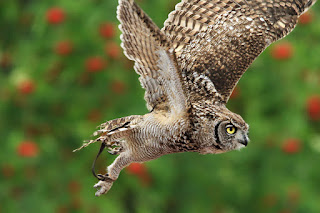 Virginia Tech engineers, leading an international team of researchers with members from Florida Atlantic University, Lehigh University, and Cambridge University, say a turbine blade inspired by the downy covering of owl feathers may offer a way to reduce noise from engines or wind farms. Their results were recently presented at the American Institute of Aeronautics and Astronautics Conference in Dallas, Texas.

William Devenport, a professor of aerospace and ocean engineering in the school’s College of Engineering; second-year doctoral student Ian Clark of S​lidell, Louisiana; research professor Nathan Alexander, and others have focused on a phenomenon called trailing-edge noise. When a blade like the ones on a wind turbine slices through the air, the sharp edge at the back of the blade converts the air’s turbulence into sound waves. The resulting noise is often cited as a barrier to the more widespread installation of wind farms because it can be a nuisance for nearby residents. Finding a way to reduce the noise could boost wind farming and increase the availability of sustainable energy.

For inspiration, Devenport looked to a species that seems to have solved the problem of trailing-edge noise: owls. Unlike many other birds, owls can fly silently to surprise their prey. “From an engineer’s perspective, that shouldn’t be possible,” Devenport says, “because if you look at the owl, it’s covered in edges, and each of those edges should radiate noise.” In fact, when researchers in past studies have sent other kinds of birds, like pigeons and hawks, flying past sensitive microphones, their flapping wings generate substantial trailing-edge noise. But when an owl flies by, the microphones detect virtually nothing.

Devenport and his collaborators wondered if tiny hairs that cover the owl feathers could be reducing the trailing-edge noise. To mimic this effect on a wind turbine blade, they designed a set ribs, or finlets, that would sit in front of the blade’s trailing edge and manufactured them with 3-D printing technology. In all, 22 different finlet configurations were tested last year by 150 aerospace and ocean engineering undergraduate students as part of a lab course. The finlets reduced the trailing edge noise substantially. Devenport explained that the finlets may chop up the turbulence approaching the trailing edge into smaller eddies that can’t generate a loud noise. “Most of the sets we tested last year worked really well, and so we tried to refine it this year,” Clark says.

Like last year’s work, the second round of testing, funded by the Institute for Critical Technology and Applied Science, was performed in the Virginia Tech Stability Wind Tunnel, which has a novel configuration for measuring acoustics. Its walls are made from custom-made Kevlar panels. Sound can travel through, but the air does not. Behind the tightly-stretched fabric, 117 microphones record the noise produced as air rushes over the blade at up to 160 miles per hour.

“We think this is a whole new way of looking at noise control,” Devenport says. The team has filed an international patent on the design; they are also involved in licensing discussions. While the current design is optimized for wind turbine blades, Devenport and Clark imagine that a similar strategy might work for smaller blades, like the fans in computers and cars. “The end goal is getting it out in the real world and making a difference,” Clark says.