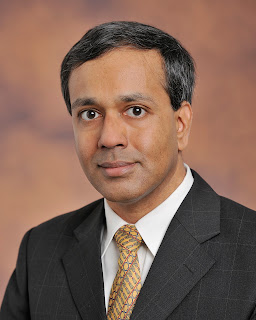 If the current national challenge to make solar energy cost competitive with other forms of energy by the end of this decade is met, Ranga Pitchumani, the John R. Jones III Professor of Mechanical Engineering at Virginia Tech, will have played a significant role in the process.
U.S. Secretary of Energy Steven Chu announced the Department of Energy’s SunShot Initiative in February 2011. Its objective was to reduce the installed cost of solar energy systems by about 75 percent to allow widespread, large-scale adoption of this renewable clean energy technology. Following the announcement, Pitchumani was invited to direct the Concentrating Solar Power (CSP) program for the SunShot Initiative towards its ambitious goals. “The SunShot goal is to get solar energy technologies to achieve cost-parity with other energy generation sources on the grid without subsidy by the year 2020. That’s an aggressive mission which calls for several subcomponent innovations and ingenious system designs to drive costs down, while improving efficiencies,” says Pitchumani.

“Fossil fueled power plants pose a potential risk to the environment through an increased carbon footprint, and my efforts are in supplanting fossil energy with renewable sources including solar energy. Concentrating solar power plants capture the solar energy and store it as heat, which can, in turn, be used to drive a turbine and produce electricity. In fact, studies have shown that CSP with thermal energy storage also facilitates greater incorporation of other renewables such as wind and photovoltaic on the grid. That’s a win-win on all fronts,” Pitchumani says.

“Due to the intermittent nature of solar energy availability, it is often desirable to store thermal energy from a concentrating solar power plant for use on demand, including at times when solar energy is unavailable such as during cloud cover or overnight. Energy can be stored either as sensible heat (in solid or molten media), latent heat (using phase change materials), or as products of a thermochemical process, of which latent heat and thermochemical storage offer high volumetric energy density and potentially high power cycle efficiency, provided costs can be tamed,” he adds.

In his role, Pitchumani oversees a team of several program managers and technical, financial, and support personnel, who actively manage the awards in the portfolio. During his leadership, the SunShot Concentrating Solar Power Program has launched over $130 million in new funding initiatives since October 2011. Combined with the awards continuing from prior funding opportunities, the program maintains an appropriately balanced portfolio of projects at industry, national laboratories, and universities dedicated to applied scientific research, development, and demonstration to advance cutting-edge concentrating solar power technologies for the near, mid, and long terms.

Concentrating solar power plants could provide for low-cost energy generation and have the potential to become the leading source of renewable energy for future power generation. In the United States, several large-scale commercial plants (e.g., Ivanpah Solar Electric Generating Station, Crescent Dunes Solar Energy Project, and Abengoa Solana Generating Station) are currently under construction, with some getting ready to be commissioned starting in a few months. These would more than triple the total capacity of concentrating solar power-generated electricity to about 1.8 gigawatt and place the United States as one of the global leaders in CSP capacity. On a worldwide scale, studies suggest that concentrating solar power technology systems could provide approximately one-quarter of the global electricity needs by 2050, Pitchumani says.

The College of Engineering at Virginia Tech offers 14 engineering disciplines and computer science. The college’s 6,000 undergraduates benefit from classroom instruction with two unique design-and-build facilities and the Cooperative Education Program. With more than 50 research centers and numerous laboratories, the college offers its 2,000 graduate students opportunities in advanced fields of study such as biomedical engineering, state-of-the-art microelectronics, and nanotechnology.