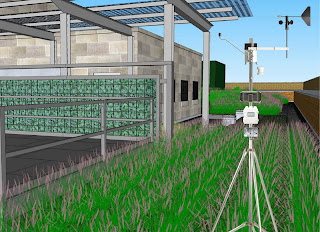 The managers of an 87-year-old government building in Pittsburgh have a challenge: reduce the amount of rainwater that runs off the roof. Allegheny County officials are facing an expensive wastewater system upgrade, and they hope reducing stormwater will help reduce the severity of Combined Sewage Overflows (CSO). A few months ago, they settled on a green roof solution, a plan to cover one half of the building’s roof with boxes of plants settled in a growing medium. The area is as wide as a basketball court and twice as long.

In April, 2010, they began to build the green roof, and chose to equip the new roof with web-based weather stations from Massachusetts-based Onset to monitor its performance. Monitoring the green roof’s success in reducing runoff is critical to the project, according to Darla Cravotta, the special projects coordinator with Allegheny County. “We can’t talk about the benefits of a green roof without monitoring it,” says Cravotta. “But when we have data, we can encourage other people to build green roofs,” she said.

Allegheny County has a team of four companies working on the project, which is being funded through the Department of Energy’s American Recovery and Reinvestment Act (ARRA). The project team includes Cuddy Roofing, Eisler Landscapes, IVC Architects, and Civil & Environmental Consultants, Inc. (CEC). The first three companies are working on designing and building the green roof, while it will be up to Pittsburgh-based CEC to monitor a multitude of data points over the next six years.

It’s not the first time Buck has used Onset devices in a project. In a 2005 job, for example, he used Onset data loggers to track data for an alternative soil cap study at a solid waste disposal site. “We had a pretty hot setup for the time,” Buck said. “We created a 900 MHz network that relayed data and emailed me three times a day.” But that system had weaknesses that the U30 devices have overcome, he said.

Originally, Buck wanted to use Wi-Fi communications for all eight weather stations. “But it turns out that Wi-Fi did not transmit through the roof,” he says. Instead, he put two Ethernet-enabled U30s inside the government building and placed an access point on the roof so the other six Wi-Fi devices up there could communicate. Buck is using Onset’s HOBOlink web server as a data repository and a way to monitor the system remotely, sensor-by-sensor.

The stations will also be used to detect humidity spikes in several roof areas. The county administrators acknowledged that the 1923 building already had a history of roof leaks, a problem that could be made worse by putting structures up there. “There are people who are understandably nervous about more roof leaks,” Buck said.

If pre-set humidity limits are reached – which could suggest a possible roof leak – the station will automatically send Buck a text message alert. “We’ll get a message before the water starts dripping,” he says. “That wasn’t a primary objective of the project, but it is a benefit.”

Civil & Environmental Consultants, Inc. (CEC) is involved in sustainable design and alternative and renewable energy. Established in Pittsburgh and celebrating its 21st year in business in 2010, CEC is a national, multidisciplined consulting firm providing a diverse scope of consulting services from 11 regional offices.