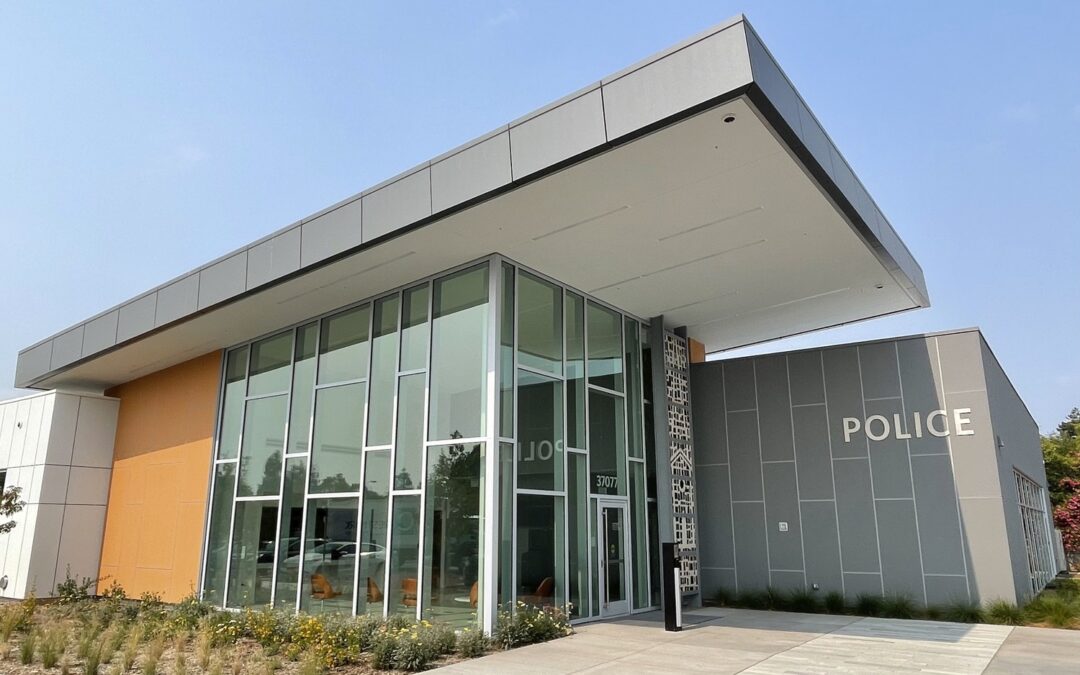 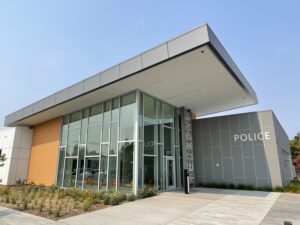 The project team actually built three buildings, a public plaza featuring terrace seating, and a parking lot. The new City Hall is modern and inviting and includes a new state-of the-art Council Chambers. The new library is roughly 10,000 square feet larger than its predecessor and offers a teen lounge and children’s storytime room, in addition to a large meeting space and a curiosity shop. The new police building consolidates all station operations in a single facility and includes an emergency dispatch center and property and evidence facility.

“The new civic center provides the Newark community a modern space to congregate for special events and interact with one another,” says Webcor Field Specialist Juan Ramos. “It’s a space to share, learn, grow, and properly manage a thriving city.”

“With risk comes opportunity, and when you foster great working relationships with the owner, trade partners, and designer, you have the ability to thrive in that environment,” says Webcor Project Director Daniel Chavarria. “Overall, this has been the most enjoyable project experience of my career. When you’re able to be part of a team that delivers a quality project while providing a positive experience for those involved, it truly is a win-win all around.”Samantha Dumalig served as senior project engineer for Webcor, and a host of engineering firms worked on the project under Perkins&Will. This included DCI as the structural engineer, KPFF as the civil engineer, Cupertino Electric handling electrical engineering, and Southland Industries doing mechanical engineering.

Design-build’s growing popularity among government agencies bodes well for Webcor’s strategic growth opportunities, according to Webcor Vice President Tolga Acar. “The design-build model is new to many municipalities,” Acar says. “The fact that it has worked seamlessly at the Newark Civic Center project will hopefully encourage more cities to utilize the same model for their civic projects. If the success of the project had to be credited to a single factor, it would be how well Webcor and Perkins&Will functioned together as one powerful team. Under our design-build partnership, Webcor and Perkins&Will found the rhythm to play their respective roles to perfection.

The Webcor team that delivered Newark Civic Center was largely composed of recent college graduates who were entrusted with critical roles on the project, including the management of office and field operations for the extensive and complicated site work throughout the project. “The Webcor team behind the civic center was an excellent example of rapid development of young talent,” says Webcor Senior Construction Manager Pat Reidy.

Chavarria agrees and says. “This was one of the most inexperienced project teams I’ve ever been a part of, but their willingness to learn and relentless work ethic are what pushed this project from good to exceptional. These projects are key to expediting early career development by exposing young engineers to more learning opportunities that may not present themselves on larger projects.” 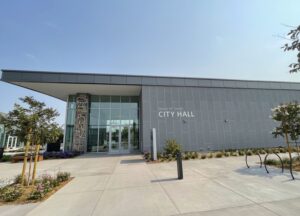 Reidy agrees that smaller, fast-paced projects such as Newark Civic Center are ideal opportunities for Webcor leaders to train younger employees who are eager to learn and immerse themselves in the construction process. “This type of project typically goes through the entire construction cycle, from demolition of existing facilities to turnover of the new building, in two to three years,” he says. “Experiencing the full construction cycle is immeasurably valuable to their career development.”

As the civic centers of smaller communities throughout California continue to age, Webcor anticipates a growth in demand for new or renovated facilities and looks forward to pursuing projects similar to the Newark Civic Center, such as the recently awarded Contra Costa Administration Building. Construction is expected to begin in early 2022.

“The relationships we built on the Newark Civic Center job was the catalyst for us landing the Contra Costa Administration Building,” Chavarria says. “We were able to bring almost the entire team from Newark onto the Contra Costa job since Newark’s completion lined up nicely with the start of Contra Costa. Keeping an entire team on two consecutive jobs is rare in our business, as the opportunity doesn’t often present itself.”

California-based Webcor provides commercial construction services. Founded in 1971, it has been honored as one of the greenest builders in the state, Webcor has offices in San Francisco, Alameda, San Jose, San Diego, and Los Angeles. More information is available on the Webcor website and on LinkedIn, Facebook, Twitter and Instagram.

Incorporated in 1955, Newark is located just east of the Southern San Francisco Bay in Northern California and boasts the first “green” community college in the nation.