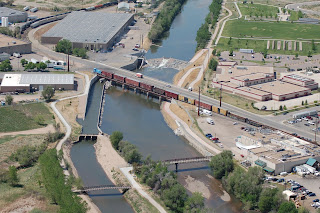 The Denver Wastewater’s South Platte River – Globeville Area Project was recently completed after 13 years and three phases by Belt Collins (formerly Love & Associates) to become the single largest flood control project ever undertaken by the City and County of Denver and the Urban Drainage and Flood Control District (UDFCD).

In mid-1995, UDFCD and Denver contracted with Love & Associates, Inc. dba Belt Collins to prepare an updated preliminary design and construction plans for flood control improvements for a 1.5-mile reach of the South Platte River.  Extensive outreach was conducted in the adjacent floodplain communities, and a consensus was reached on what riverine/recreational improvements would most benefit the community.  An extensive flood control improvement project was then undertaken to contain the 22,000 cfs 100-year flood; rehabilitate 7,000 feet of the river’s channel; remove approximately 300 acres of residential, commercial, and industrial lands from the floodplain; and to improve the recreational usage of the corridor while enhancing wetlands and in stream and terrestrial habitats.

Denver has been working to improve the Globeville area since 1994, when they received an EPA grant to fund investigation into potential remediation solutions for properties blighted from former industrial use.  As development progressed environmentally, Denver Wastewater and UDFCD focused on a plan to mitigate flooding of the South Platte through the low lying neighborhoods.

The community was invited to provide input for improvements to the area, with over a dozen public meetings held between 1995 and 2005.  In addition to cleaning up the river and providing increased flood protection, a desire for open space and completion of the Platte River Greenway Trail between Denver and Adams County was voiced by local citizens.  All these improvements would naturally encourage investment in the area through economic development.

The first two phases of the project stabilized bank erosion and protected bridge abutments from toe scouring.  Improvements were made to the trail system and jetties were constructed for in-stream habitat improvement.  Riprap was imported in order to “train” the river to make bends, and boulders were placed to create places for fish to hide.  Love and his team of engineers worked closely with CDOT, who was improving I-70 over the river at the same time.

The final phase was estimated to cost as much as the first two phases together.  Upon completion of this phase, the river’s conveyance capacity was increased by lowering the riverbed approximately eight feet.  This required reconstruction of  a railroad bridge and suspended 36-inch gray water pipeline that crosses the river just downstream of the Franklin Street bridge.  Belt Collins also designed a modification to the existing diversion dam that directs the river flow into the Farmers Reservoir and Irrigation Company’s Burlington Ditch and constructed a new, more natural, dam upstream of Franklin Street with a new approach channel to the ditch’s headgates incorporating a fish ladder.

This project was completed with a construction cost of approximately $25 million and represents state-of-art water resource engineering. With the completion of this project, the South Platte River corridor through north Denver now provides the community with an enhanced recreational experience, improved aquatic, terrestrial and riparian habitats and environmental sustainability.

In addition to its U.S. offices in Honolulu, Seattle, Boulder, and Louisville, Belt Collins has offices in Hong Kong, Shenzhen, Singapore, Bangkok, Bali, Guam, and Manila. Founded in Honolulu in 1953, Belt Collins has grown from a staff of two to over 500 professional and support staff. Services provided include planning, civil and sanitary engineering, landscape architecture, environmental consulting, interpretive planning, GIS and graphic design. Belt Collins is best known for its low impact development experience, parks design, and pubic works.   For more information contact Nancy Love at (303) 442-4588, nlove@beltcollins.com, or visit the firm’s web site at www.beltcollins.com/locations/boulder.