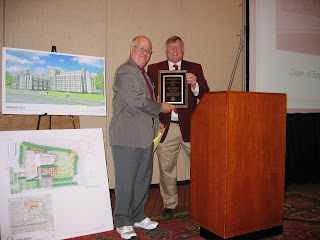 In 2007, Marc Sheffler arranged for his company, Boeing, to present a $50,000 check to the Design Team Endowment Fund, founded by the Student Engineers’ Council at Virginia Tech. A few months later, he supplemented that check with another $15,000 check from Boeing for the same cause. In 2009, he presented the Student Engineers’ Council with yet another $20,000 for the Design Team Endowment.

The Student Engineers’ Council began its Design Team Endowment to support the growing need for funding engineering design teams. “With Boeing’s help over the years, the council should successfully meet its phenomenal three-year goal — reaching $500,000 by 2010; an amount that will allow the Student Engineers’ Council to grant over $20,000 each year to engineering design teams. These competitive grants ensure the success of several design teams by allowing the students to focus on and improve the quality of their projects, which reflects very well on our College of Engineering at Virginia Tech,” said Richard Benson, dean of the college as he presented the award.

“In addition to providing for the award-winning student design teams, Marc has directed $5000 to our area public school system to support Virginia Tech’s FIRST Robotics Partnership where our students work with secondary schools on a robotics competition,” Benson, the Paul and Dorothea Torgersen Chair of Engineering, added. Sheffler has also coordinated Boeing’s support for the aerospace and ocean engineering department and a number of engineering scholarships at Virginia Tech over the years.

Sheffler joined Boeing in 1973, the same year he earned his bachelor’s degree in aerospace engineering from Virginia Tech. He has worked in a variety of positions including the Comanche Air Vehicle Design project. At the time it was built, the Comanche incorporated more low-observable stealth features than any aircraft in Army history. Afterwards, Sheffler was named as an Honorary Fellow of the American Helicopter Society. He is currently Boeing’s senior manager of the Engineering Phantom Works and is located at its Philadelphia, PA office.

As Boeing’s primary point of contact with Virginia Tech, Sheffler regularly spends several days each year on campus, meeting with researchers and students. “If you ever saw one of his emails reporting on the trip, it goes to literally dozens of Boeing employees, informing them of all of the excellent research going on in our College of Engineering.  He matches our research efforts with key decision makers at Boeing,” Benson said. “And whenever, Marc comes to town, he makes time to be with our students. They have held picnics in his honor, hosted him at a local restaurant, and enjoyed several lunches with him,” the dean said.