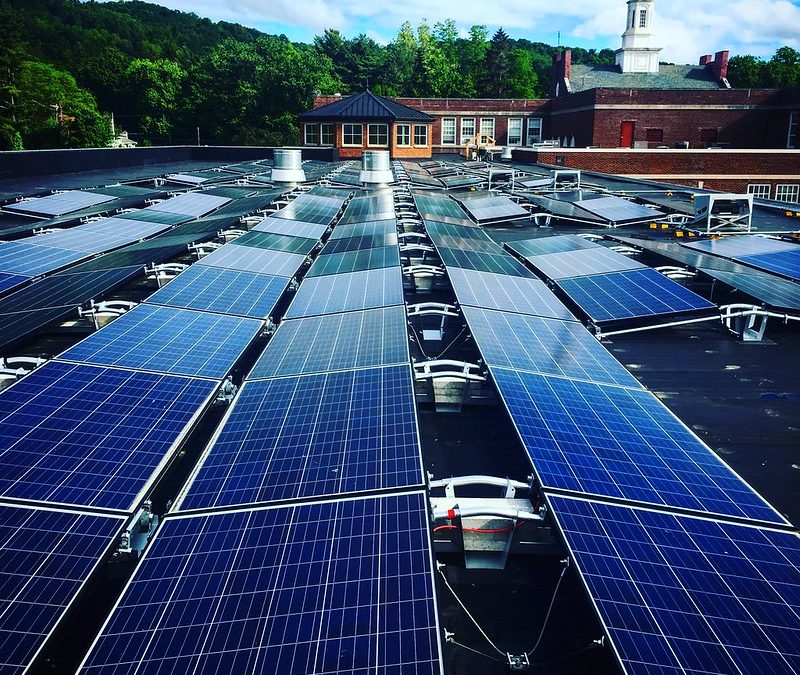 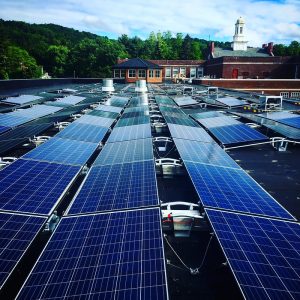 “With this significant solar project, all at New York City-owned facilities, we will boost the renewable resources in the city’s energy supply and move the city and state closer to accomplishing the ambitious clean energy goals we have set for ourselves,” says Gil C. Quiniones, NYPA president and CEO. “Integrating solar systems into community facilities throughout the five boroughs and turning underutilized spaces into green opportunities is a smart way to practice sustainability and push forward our long-term commitment to help build a cleaner, greener energy system for all New Yorkers.”

“The climate crisis is real, and it’s urgent. That is why the City of New York is taking bold steps to generate solar power on city buildings and to reduce emissions citywide 80 percent by 2050,” says Lisette Camilo, DCAS commissioner. “Solar installations on the roofs of schools and other city facilities is a common-sense way to generate green energy and reduce dependence on fossil fuels.”

The school sites are located in racially and economically diverse neighborhoods throughout all five boroughs and were chosen based on the technical viability of installing solar technology on their roofs. The City of New York sought NYPA’s assistance with the installation of approximately 16 megawatts of power generated by solar installations on rooftops of its facilities. The city enlisted NYPA’s support on this initiative to help achieve Mayor Bill de Blasio’s goal of installing 100 MW of solar power on public buildings by 2025 and reducing citywide emissions 80 percent by 2050. The initiative will help achieve Governor Andrew M. Cuomo’s statewide goal of having 70 percent of New York’s electricity come from renewable sources by 2030.

NYPA is asking developers to submit proposals to design, construct, and own solar PV systems at 50 sites throughout the five boroughs. NYPA will select the developers, manage the project, and arrange 20-year power purchase agreements for DCAS and DEP to buy the electricity output from each of the projects at competitive prices. The due date for responding to the Request for Proposals (RFP) has been extended until August 7, 2020.

The solar systems, which have the option of including energy storage, are planned to be constructed on 46 schools run by the Department of Education and account for about 11 megawatts of new power generation. Several sites managed by DEP, including the Wards Island plant along the East River in upper Manhattan, will account for the additional 5 megawatts.

At Wards Island, a combination of ground mounted, carport, rooftop, and elevated canopy solar PV systems will be installed throughout the eight-facility complex totaling up to 4,843 kWDC of solar PV capacity. Power generated will serve the loads of the plant and a potential battery energy storage system which could reduce demand charges.

As part of the overall project, more than 1 megawatt of solar arrays will also be installed at the Catskill/Delaware Ultraviolet Light Disinfection facility in Valhalla and at wastewater resource recovery facilities in Pine Hill and Margaretville.

The project will incorporate a new power source into the school districts’ infrastructure and allow the city to purchase power generated on site instead of purchasing it from a utility, which may or may not be from a renewable source. In total, the project is estimated to offset more than 4,500 metric tons of CO2 equivalent each year, equivalent to removing more than 950 cars from the road for one year.

The solar systems will accelerate progress under the state’s Climate Leadership and Community Protection Act (CLCPA), the most ambitious emissions-reduction legislation in the nation, which calls for 6,000 megawatts of distributed solar by 2025 and 3,000 megawatts of energy storage by 2030 and also support the state mandate for a 100 percent carbon-free electricity sector by 2040.

The city and the Power Authority conducted site assessments to identify the most feasible and appropriate locations to install solar PV systems to help the city achieve its renewable energy goals. Selected locations also support the city’s efforts to advance environmental justice as many of the sites are in areas with poorer air quality and lower median incomes. The project sites are anticipated to be interconnected behind the meter to the buildings’ electrical systems.

Development work on the projects is anticipated to commence later this year when a developer(s) is selected. Operation of the systems is expected to come online throughout 2021 and 2022.

NYPA has completed several solar projects at public school districts through a joint program with the New York State Energy Research and Development Authority (NYSERDA). Arrays were constructed for the Somers Middle School and Tarrytown school district, both in Westchester County, Hudson Schools in Columbia County, and the New York Institute in the Bronx.

NYPA is also resuming construction on a $134 million heating system replacement at the Wards Island complex. When complete, the DEP-funded project will improve energy efficiency, reliability, and functionality of the facility while eliminating fuel oil usage by 90 percent

NYPA is the largest state public power organization in the nation, operating 16 generating facilities and more than 1,400 circuit-miles of transmission lines. More than 80 percent of the electricity NYPA produces is renewable hydropower. NYPA finances its operations through the sale of bonds and revenues earned in large part through sales of electricity. For more information visit www.nypa.gov.

The Department of Citywide Administrative Services (DCAS) provides effective shared services to support the operations of New York City government. Its commitment to equity, effectiveness, and sustainability guides its work with city agencies on recruiting, hiring, and training employees; providing facilities management for 56 public buildings; acquiring, selling, and leasing city property; purchasing more than $1 billion in supplies and equipment each year; and implementing conservation and safety programs throughout the city’s facilities and vehicle fleet.

DEP manages New York City’s water supply, providing approximately 1 billion gallons of drinking water each day to more than 9 million residents, including 8.5 million in New York City. The water is delivered from a watershed that extends more than 125 miles from the city, comprising 19 reservoirs and three controlled lakes. Approximately 7,000 miles of water mains, tunnels and aqueducts bring water to homes and businesses throughout the five boroughs, and 7,500 miles of sewer lines and 96 pump stations take wastewater to 14 in-city treatment plants. DEP has a robust capital program, with a planned $20.1 billion in investments over the next 10 years that will create up to 3,000 construction-related jobs per year. In support of the OneNYC 2050 Plan and the Climate Mobilization Act of 2019, DEP aims to become energy and carbon neutral by 2050. For more information, visit nyc.gov/dep.