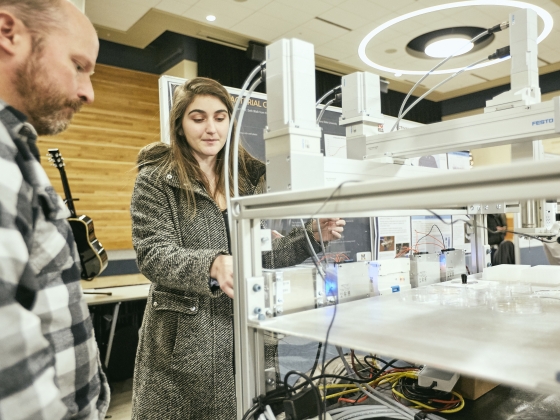 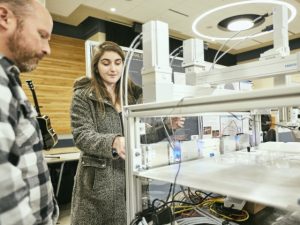 Countless hours spent hunched over petri dishes, using needles to pluck tiny samples from bacteria colonies and place them in test tubes, are not the most exciting experiences for researchers in Seth Walk‘s lab at Montana State University. Walk, who studies the complex microbial communities in the human gut, had considered paying $70,000 for a robot to perform the time-intensive routine. But then he learned that MSU engineering students could make one for him.
His satisfaction with the MSU-made device was evident as he took a close look during the biannual Design Fair recently, when roughly 30 teams of engineering students displayed their senior capstone projects in the Strand Union Building ballroom. “They did a great job,” said Walk, an associate professor in the Department of Microbiology and Immunology in MSU’s College of Agriculture and College of Letters and Science.
The desk-sized research apparatus came to life with a few computer commands, its needle sliding into place above a petri dish. An optical sensor stood ready to scan the petri dish’s contents, detecting dots that represented distinct bacteria colonies ready to be sampled. “With this, we’ll grow the bacteria and then let the machine do the work, which frees up time to focus on our research,” Walk said, noting that the device also sterilizes the needle in between each sampling.
Over the course of two semesters, the four-person capstone team — likely the first-ever all-female team in mechanical engineering — took Walk’s request and created a product that needs only some software tweaks to be fully operational. “The students came up with the entire design,” says team adviser Ron June, associate professor in the Department of Mechanical and Industrial Engineering.
“It was a lot of work, but I enjoyed it,” recalls team member Tayler Fortner, a mechanical engineering major from Winnett, MT. Along with teammates Katelyn Kalberer and Anna Teintze, Fortner focused on designing the complex mechanical system that precisely moves the needle to sample the bacteria. “It was a very involved project,” Fortner said. “It was an application of everything we’ve been doing in school.”
“There was a big learning curve,” said fourth team member Sandra Zmeu, who focused on the electrical and computer parts of the machine. To program the code that guides the machine’s motions and controls the optical sensor, she had to learn two computer languages, she says. “It was a real learning experience,” says Zmeu, who is heading to a job at Boeing in Seattle following graduation.
Mechanical engineering technology major Teintze, from Bozeman, MT, said she enjoyed the collaboration on the project. “Working with an enthusiastic team was really cool,” she remarks. Kalberer agreed: “An important part of being an engineer is being able to work with other engineers,” she says.
All seniors in MSU’s Norm Asbjornson College of Engineering complete capstone projects as a requirement for earning their degrees. Working in teams and advised by MSU faculty — and sometimes sponsors from private industry — the students find solutions to engineering problems. Other projects at the Design Fair included solar-powered car components, a snowplow radar system, and self-activated ergonomic seating. “Several faculty members have had research equipment built by capstone teams,” June says. “The teams are a major contributor to our research at MSU.”
According to capstone coordinator David Miller, associate professor of mechanical and industrial engineering, there is always a need for capstone sponsors. That presents an opportunity for MSU faculty who need any manner of customized equipment. He states, “The capstone projects solve real problems while providing an opportunity for students to learn.”