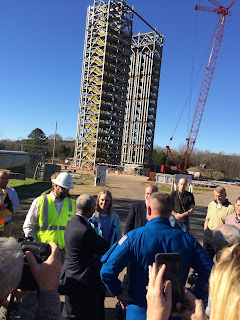 “Jen has been tireless in her devotion and technical attention to all phases of this project. The fact that she is the only woman on the technical or construction team is overshadowed by the fact that she is simply one heck of an engineer. Designing a structure of this magnitude that can withstand the forces the SLS rocket fuel tanks will experience during launch is a monumental technical feat,” according to Chris Sherry, PE, Merrick senior vice president and COO.

The 215-foot test stand will be completed by 2016 to allow for testing to begin in 2017. The first launch is set for 2018 and will include an asteroid landing, a manned Mars mission, and an unmanned mission beyond Mars. For additional coverage and an interview with Speers, visit http://goo.gl/GMtfsS.