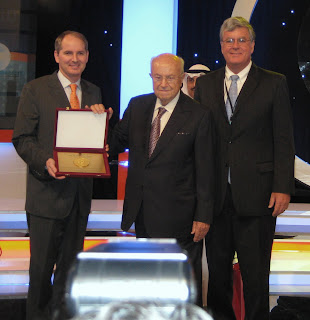 A team of engineers affiliated with Orange County, California’s Groundwater Replenishment (GWR) System, the world’s largest water recycling facility of its kind, were honored with the 2009 Säid Khoury Award for Engineering Construction Excellence. The international award was presented in  at the General Assembly of the World Federation of Engineering Organizations.

“Over a decade in development, the elected leaders of OCWD and OCSD were visionary in their pursuit of the project and their understanding of water reuse and its potential as a new water resource,” stated George Tchobanoglous, professor emeritus of civil and environmental engineering at the  of , . “The System has had a worldwide impact technically and socially in making indirect potable reuse a reality as a reliable, environmentally friendly and cost-effective supplemental source of water.”

The GWR System, a joint project of OCWD and OCSD, is a state-of-the-art water recycling facility that became fully operational in January 2008. The GWR System is the world’s largest advanced water purification facility of its kind, serving as a model for global water recycling projects. It takes highly treated sewer water and purifies it through a three-step process that includes microfiltration, reverse osmosis and ultraviolet light (UV) with hydrogen peroxide, resulting in near-distilled quality water. The facility produces enough new water to meet the needs of 500,000 people.

“The GWR System is truly groundbreaking in its uniqueness, and is the world’s largest water purification reuse project,” said Robert Bein, P.E., chairman emeritus of RBF Consulting and president emeritus of the American Society of Civil Engineers. “The unprecedented system has already gained worldwide notoriety for its creative use of state-of-the-art technology to help solve the critical water needs of .”

Among its awards, the GWR System has been honored with the prestigious  Industry Water Award and the American Society of Civil Engineers (ASCE) Outstanding Civil Engineering Achievement Award.

For more information about the Groundwater Replenishment System, visit www.gwrsystem.com.

Orange County Water District (OCWD) manages the large groundwater basin that underlies north-central  that provides most of the water for more than 2.3 million citizens. OCWD is a special district established by the California State Legislature in 1933 and governed by a 10-member board of directors. Separate from the  of , OCWD supplies water to residents in the cities of , , , , , , , , ,, Los Alamitos, , , , , , , , Villa Park,  and . Go to www.ocwd.com for information.

The Orange County Sanitation District is a public agency responsible for safely collecting and treating wastewater (sewage) for 2.5 million people. OCSD beneficially reuses and recycles the treated wastewater and other resources resulting from the treatment process. It is a special district established by the California State Legislature and governed by a 25-member board of directors. The directors are comprised of elected representatives for each of the sewer agencies or cities within OCSD’s 471-square mile service area. Go to www.ocsd.com for information.