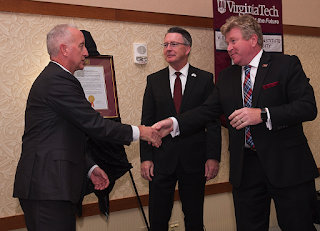 Virginia Tech has named its Department of Aerospace and Ocean Engineering in honor of alumnus Kevin Crofton (left above), president and chief executive officer of SPTS Technologies, in recognition of his philanthropy. Crofton, a native of Fincastle, Virginia, has committed $14 million to the department that will bear his name and $1 million to the university’s Division of Student Affairs. “Kevin’s generosity is both humbling and inspiring,” says Virginia Tech President Tim Sands. “It opens up tremendous new possibilities for one of our academic departments and will benefit all our students by funding experiential learning programs.”

Crofton aspired to be an astronaut — following in the footsteps of his heroes, Neil Armstrong, Chuck Yeager, and Chris Kraft, who is also a Hokie — leading him to study to become an aerospace engineer. He earned his bachelor’s in aerospace and ocean engineering in 1982, holds an MBA in international business from American University, and heads a global semiconductor and microelectronic device manufacturing company headquartered in the United Kingdom. “I chose Virginia Tech because it has one of the best aerospace programs in the country,” says Crofton, reflecting on his decision to attend the university. “The education I received is one that taught me to be inquisitive, data-driven, and respectful of science. The social environment exposed me to different people, cultures, and views of life.”

The 55-year-old aerospace engineer further describes his collegiate experience at Virginia Tech as providing him with the foundation to have a successful professional and personal life, in addition to a platform from which to make a positive impact on the world. During the first decade of his career, Crofton worked on U.S. Department of Defense and commercial programs in propulsion for United Technologies, including Boeing’s Inertial Upper Stage Program, which positioned satellites in geosynchronous orbit from the space shuttle.

“Kevin’s gift will heighten the aerospace and ocean engineering department’s role at the university,” says Don Taylor, interim dean of the College of Engineering. “With a gift of this size, we can enhance learning for our engineering students and allow faculty, students, and staff to collaborate on cross-cutting, complex research projects.” The Rolls-Royce Commonwealth Professor of Marine Propulsion and Department Head Eric Paterson added that “to be one of the few named aerospace and ocean engineering departments will increase our stature on a national and global level.”

The Kevin Crofton Department of Aerospace and Ocean Engineering has more than 550 undergraduate students and 160 graduate students enrolled. Its faculty and students are engaged in numerous areas of research, with annual expenditures of more than $8 million. Departmental facilities include wind tunnels, a flight-test runway and hangar, and an advanced power and propulsion laboratory.

The $1 million Crofton directed to Student Affairs is the largest cash gift ever made to that division and will benefit initiatives through VT Engage, Virginia Tech’s service-learning and civic-engagement center.

“Kevin is an extraordinary leader, alumnus, and human being, with a profound commitment to and modeling of Ut Prosim (That I May Serve),” Vice President for Student Affairs Patty Perillo said, referring to the Virginia Tech motto. “His gift will make an extraordinary difference, allowing more students to serve and understand what it means to serve.”

“In many ways Ut Prosim is an extension of the values I live by and a humble expression of my desire to make a difference,” Crofton remarks. “I have always wanted to give back to Virginia Tech in a meaningful way – one that makes a significant contribution and will impact future generations.”