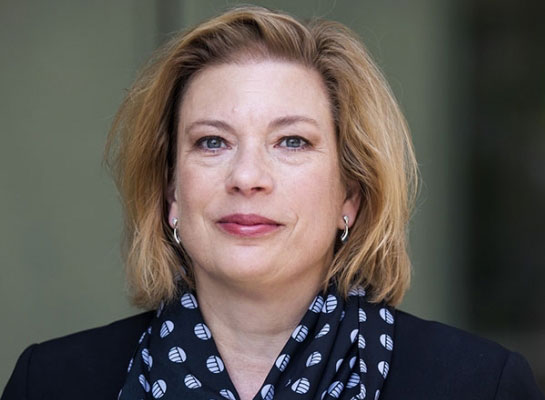 As a biomedical engineer, Ellen Arruda
researches many aspects of knees.

In the United States, the number of knee anterior cruciate ligament (ACL) reconstruction surgeries continues to rise, with the highest incidence of ACL injury coming in females 14 to 17 years old. Females suffer these injuries between two and seven times more frequently than their male counterparts.

Ellen Arruda, a professor of mechanical engineering at the University of Michigan, says, “I collaborate with two clinicians who routinely do ACL reconstructions. The most often cited reason for the increase in these injuries is an increase in the number of children playing sports such as soccer and basketball, year-round, sometimes on multiple teams at once.”

Arruda epitomizes a trend where more and more mechanical engineers and biomechanics specialists are getting involved with knee injuries, applying techniques normally reserved for hard materials like steel. Greg Myer, a biomechanist, comments, “We’re working on the prevention side. They’re working on the repair side. Mechanical engineers can do many things to support the surgery, the first being helping surgeons select the correct ligament graft.”

As the Maria Comninou Collegiate Professor of Mechanical Engineering and a professor of biomedical engineering, Arruda has research interests that cater to this. They include mechanical behavior of materials including polymers, elastomers, and soft tissue; tissue engineering of tendon and muscle constructs; and modeling of growth and functional adaptation in soft tissue.

Myer serves as director of research and The Human Performance Laboratory for the Division of Sports Medicine at Cincinnati Children’s Hospital Medical Center and also associate professor in the Department of Pediatrics and the Department of Orthopedic Surgery in the College of Medicine at the University of Cincinnati. His research interests include injury biomechanics, human performance, pediatric exercise science, preventative medicine, and sensorimotor neuroscience.

A complex joint
In the knee, ligaments work with bones, muscles, cartilage, and the meniscus to form a complex joint. The ACL is one of the four major ligaments in the knee, playing a critical role in stabilizing the joint during loading. The other three ligaments are the posterior cruciate ligament (PCL), the medial collateral ligament (MCL), and the lateral collateral ligament (LCL). Ligaments attach to the femur bone above the knee and the tibia in the lower leg to hold the joint together. The ACL threads through the middle of the joint, making it difficult to see and susceptible to injury. It’s the most-often torn ligament in the knee and in sports. 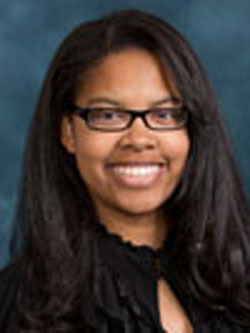 Kaitlyn Mallett used CAD to model ACL tissue as part of her PhD research. She has gone on to become an Internet of Things engineer for Intel in Phoenix, Arizona.

Typically, the ACL is injured during landings that involve rapid deceleration and direction change. Full tears of the ligament tissue require complete surgical replacement if a return to physical activities is desired. Myer says, ”There’s a lot of debate over the best graft for this. The patella tendon that attaches the tibia to the kneecap is a common choice, and the hamstring tendon has increased in popularity, and then there’s also the allograft from a cadaver.”

Current methods of ACL replacement generally work well, as they stabilize the knee and allow people return to sports. But the graft replacement technique doesn’t work for everyone, especially kids because they’re still growing. Grafts from a cadaver have the highest failure rates, with estimates of about 20 percent. “We think the grafts are too stiff. It’s usually an adult cadaver graft going into a young child, so it’s overdesigned for that child in terms of stiffness,” Arruda states.

The ideal replacement for a torn ACL restores native anatomy and function to the knee. Mounting evidence, however, suggests that current strategies alter the biomechanics of the joint. Instabilities are thought to develop over time through a graft tissue that becomes more lax than the native tissue through loosening, mechanical degradation, or both.

As a result, young athletes are at a greatly increased risk for a second ACL injury. Nearly one in four youth who return to high-risk sports sustain another ACL injury at some point in their career. For patients younger than 20, the increased risk for sustaining an ACL graft rupture is as high as threefold, with the risk higher for females than males.

This is a key place where engineers play a role, according to Myer. “Mechanical engineers can help with the tensile strength of the graft and help us learn how the graft degrades over time following the reconstruction and before it starts to build back up in strength. From the surgeon’s standpoint, helping them understand the best grafts is probably the most direct link to helping in their selection for reconstruction.”

Kaitlyn Mallett saw this first hand, as she previously worked as a graduate student research assistant in the Department of Mechanical Engineering at the University of Michigan. With Arruda as her advisor, she went on to get her PhD in mechanical engineering. Her dissertation research involved experimentally characterizing native ACL and replacement grafts to define their mechanical properties.

Long-term problem
Actually, researchers have been trying to characterize native and graft ligament tissue for decades. Arruda reports, “We do experiments to characterize the mechanical properties of the ACL, MCL, and other soft tissues of the knee, and we implement these in finite element models of the knee joint and simulate impact loading events.” Mallett adds, “I did a lot of the experimental and some computational work. There’s a variety of ways you can characterize tissue.” 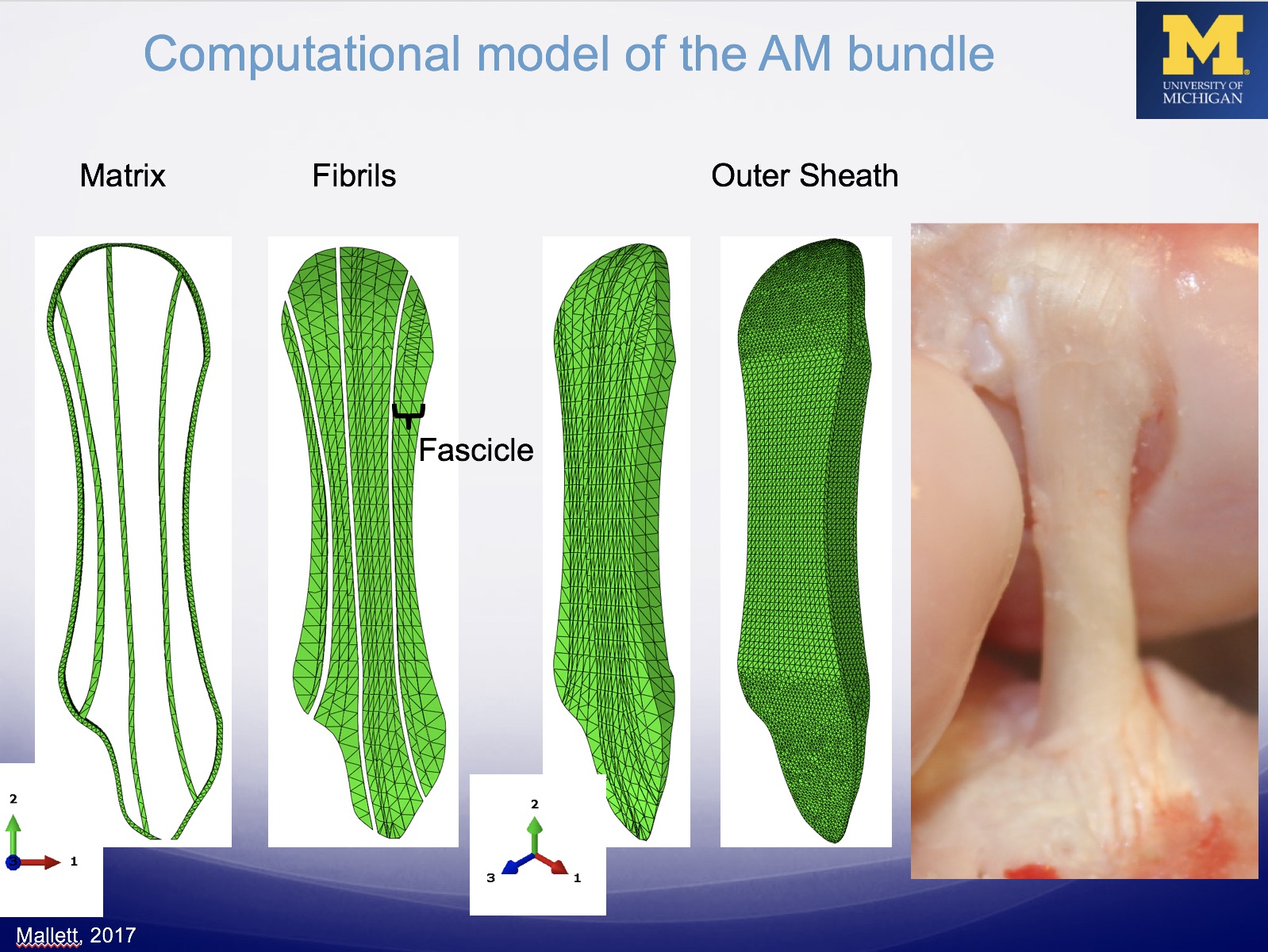 An ACL and a computer model of it.

As Arruda explains, “The model starts with an MRI of the knee. We convert that into a finite element mesh and translate that from the MRI datafile to volumetric elements used in finite elements. That involves taking every slice of the MRI and finding the outline of each tissue in the knee. We call that segmenting the knee.” Mallett expands on this: “The model is made of elements that are deformable, so you create the overall geometry and break it into elements and then apply properties to each section.”

On the experimental side, Mallett says, they take donated tissue and cut out all the soft tissue except for the ACL and align it in a well-known loading state and perform experimental tests that give the mechanical properties needed for a computational model. “Once you get those properties by performing several experiments, they can go into a theoretical model, and you turn that into the computational model. You can use that to perform different kinds of tests, especially ones that can’t be done in a laboratory.”

“The whole idea is that the ACL is actually quite complex,” Mallett explains. “It’s made up of two different sections that twist on each other, and as you flex the knee, it twists and untwists, but it’s always taut. It’s very complicated to get the mechanical properties without relieving that tension.”

Some of this may sound like working with traditional engineering materials, but Mallett says there are differences. Ligament tissue doesn’t display co-linear behavior like steel in the linear regime. The ACL has several different kinds of parts to it that don’t behave the same way. It’s also non-linear, meaning it doesn’t exhibit a one-to-one response when strained. Soft tissue like ACL is compliant and begins to stiffen as you pull on it because it has a crimp in the fiber that straightens out. “That nonlinearity is difficult to capture.” It also exhibits a time-dependent response. If you pull it more quickly, it will behave differently than if you pull it slowly. “By taking a large number of samples and pulling them to a certain distance, I was able to get the stress-strain curve.”

On the biomechanics side, theory says rehabilitation after ACL reconstruction should focus on addressing the underlying neuromuscular problems that led to the injury. Myer points out that the Human Performance Laboratory was started in 2001 to study knee injuries and their cause. “Instead of just looking at the problem, we look at the mechanisms causing it.” Biomechanics engineers may look at a soccer player kicking a soccer ball, for example. They study athletes as they mature and do full body motion analysis, and if they’re injured, they determine the biomechanics that led to the injury.

“Landing in a knock-kneed position is the number one risk factor for injury,” Myer reports. The solution is neuromuscular training, basically strength- and power-building exercises that translate into support to reduce the risk of injury. “Our research has shown we can reduce ACL injuries by more than 50 percent by doing these. Ultimately, we don’t want the ACL to be loaded that much. We want the forces to be absorbed to the bone structures and the muscular activation.”

Fatigue enters the equation
Arruda points out that a new paradigm has emerged in studying the knee problem: ACL injury is also caused by repetitive loading and is essentially a fatigue failure. Engineers know that in metals, repetitive or cyclic loading at a load lower than the yield or tensile strength can lead to failure. Biomechanical engineers at Michigan and elsewhere are studying fatigue in the ACL to learn more about these failures. “How a ligament accumulates damage is still unknown. Once we understand that, we can start thinking about the concepts we apply in fracture mechanics of other materials to understand how much damage a ligament can tolerate.” 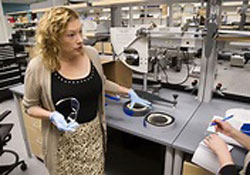 Ellen Arruda works in a lab at the University of Michigan.

How would fatigue occur in a knee? Arruda says, “If you play high-intensity sports year-round doing essentially the same move over and over again without sufficient rest and recovery time, you may be at risk as a young person of tearing a ligament. The overall hypothesis I’m trying to explore is that the damage can and does accumulate, and healing can occur as well, given time.”

A third side of the knee equation has also come to light, Arruda says. “Engineers are engaged in tissue engineering solutions to replace a torn ACL. That’s also something I’ve worked on, again with collaborators including an orthopedic surgeon and faculty members in the med school.” Their research has spun off a startup company called STEL Technologies to commercialize the technology. “We developed a tissue-engineered graft that could be used as an ACL replacement that actually remodels and grows in vivo to restore native biology and function.”

Looking to the future, Arruda says, “My vision is to one day have an MRI be a routine part of a young athlete’s annual checkup. Using a patient-specific computational model of the athlete and replicating her biomechanics, we can assess her injury risk. If her risk is high because of accumulated damage, awkward biomechanics, or poor muscle strength, we can determine what approach to take to mitigate her risk. Then we would be able to prevent some of these injuries in the first place.”